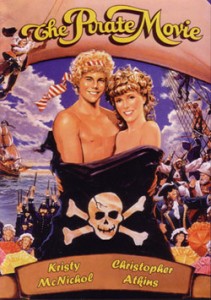 Oddness compounded with oddness is the order of the day with this painfully 80’s pop-culture pirate flick (and I say that with nothing but love for the 80’s.) Based on the Pirates of Penzance, we follow the adventures of Frederic (Christopher Atkins) and Mabel (Kristi McNichol) – Frederic as he tries to escape his pirate foster-family, and Mabel as she tries to concoct a scheme to marry off her dozen or so older sisters, thus freeing herself to marry Frederic. It sounds simple enough, but their plans are consistently stalled by a relentless barrage of keystone cops, cartoon fish, and ruby-red codpieces. Dated pop-culture references abound, including an Indiana Jones “cameo,” and even a blatant nod at Star Wars as Frederic uses the force to levitate his glowing green light-rapier (no, I’m not kidding.) The opening sequence, featuring an 80’s style pirate rock song paired with visuals from a classic pirate film(The Black Swan, if rumor serves,) might lead you to believe this will actually be a decent film, but Atkins’ stilted acting, McNichol’s mullet, and a virtual blitzkreig of sexual innuendo delivered with all the taste and subtlety of your average 12-year old will quickly convince you otherwise. END_OF_DOCUMENT_TOKEN_TO_BE_REPLACED