Well, I guess the bloke is doing his part to keep the spirit alive. But if I were a betting man, I’d stake a fair amount that the rum in question was Bacardi, or some other wretch not worth getting stabby over.

Buccaneer: The Pursuit of Infamy – an upcoming MMO – is now available for beta testing! Sign up now, if you’re interested in checking in out.

The game is still in development (of course), but it appears that it’s going to be a ship-centric MMO, meaning no mucking about as a pirate in town. But I would imagine this means more resources can be alloted to making for proper, piratey, fun ship-to-ship combat. Screenshots definitely look great, as does the trailer – can’t wait to see more.

New music from Mike Mennard, The Pirates of Rogue’s Cove, Pyrates!, Musical Blades, and Blackfeet Peet! Plus an unpublished recording from Captain Bogg & Salty. Also Bilgemunky’s complete rum list and a tribute poem to our Aussie brethren. Life is good 🙂

The first thing a reader needs to understand is that this is not the Long John of Treasure Island – Disney or otherwise. Rather, it’s a new perspective of this same character – more sinister, more murderous. Throughout, many important details of this account won’t quite match with John Hawkins’ own famous telling – this is intentional, as the author states his purpose to create a new story inspired by the Long John Silver, rather than a mere prequel limited by the exact characters and events of Treasure Island. This is important to note, because otherwise a reader might go nuts over several apparent discrepancies (Long John’s missing leg, the origins of the treasure, the role of Hawkins, etc.) END_OF_DOCUMENT_TOKEN_TO_BE_REPLACED

This film is awful. Just bloody awful. The acting is atrocious, the writing worse, and the virtually identical heavy metal music during every action seen is outright bizarre. Ron Jeremy’s cameo is slightly amusing, in that it is almost entirely comprised of him wandering around the woods alone yelling, “hello, anybody out there?” but other than that this film is an all-out dud. END_OF_DOCUMENT_TOKEN_TO_BE_REPLACED

I’ve received more than a few inquiries from readers regarding the Pyracy Pub and its extended absense. In short, the Pub – a popular forum for pirate reenactors and enthusiasts – went down a week or two ago. It’s been down before, but never for so long. So in response to those readers asking for the inside scoop, here’s everything I know regarding the Pub’s current situation:

END_OF_DOCUMENT_TOKEN_TO_BE_REPLACED 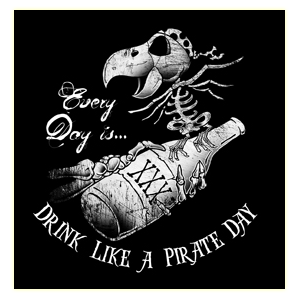 Not to be too shameless in my admiration, but it always makes my day when PirateMod sends out one of their emails with new items. True, they have an incredible selection of pirate t-shirts, but I’m particularly a fan of their other, more fashion-forward efforts of late. Which is why it’s so funny that it was one of their new T-shirt designs that so caught my attention. I mean, just look at it!

Talk Like a Pirate Day is fast approaching (September 19th, if you didn’t know), and I expect you all to celebrate accordingly. But shirts like this remind us that while TLAPD is only once a year, we still have 364 more days to enjoy our rum!

So I had this Captain Blood video embedded right here, but it wouldn’t work – something about their age protection (because no minor would lie about their age online so as to see a little pixelated gore.) Anyways, you can still view a high def preview.

END_OF_DOCUMENT_TOKEN_TO_BE_REPLACED

OK, the promotional team of 10 Cane Rum has proven they are certifiably demented… and I respect that.

END_OF_DOCUMENT_TOKEN_TO_BE_REPLACED

That’s right – if you’re too lazy to steal a ship proper then you can now make like Stede Bonnet and do the unthinkable – BUY one! While its location (a small manmade lake in southeastern Wisconsin) may not seem the perfect site for plundering, it does make a rather fine living for itself raking in the bucks from tourists.