I thought I’d try something a little different this time, so rather than blathering on by myself, I present you with the following interview of a REAL LIFE PIRATE DESCENDENT 🙂

Bilgemunky.com: Tonight we’re speaking with Adam Drake who’s agreed to be interviewed by telephone (even though he only lives three blocks from me.) Adam resides in Milwaukee, Wisconsin, and is a direct descendent of Sir Francis Drake, legendary privateer to Queen Elizabeth of England during the mid-to-late 1500’s. Adam, thanks for joining us.

Adam Drake: Thanks for having me. 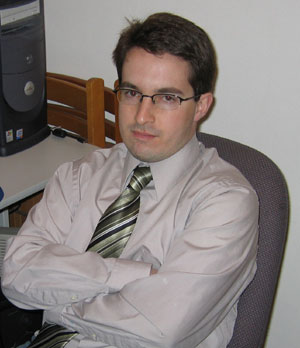 AD: Sir Francis Drake never had any children. I’m a direct descendent of his brother.

BM: No, it’s fine. I, uh, I just don’t have anywhere to go with this now. My whole interview was sort of premised on you being a direct descendent, is all.

BM: I guess you still share his blood – maybe some of these questions still apply.

BM: Ok. Let’s see. Ah! Do you have any fond memories of your great, great, etc, uncle?

AD: Well, no. He died a long time ago. Long before I was born.

BM: Do your parents have any fond memories they might have shared with you?

BM: Moving on then. Being as you share Drake’s blood, have you ever found yourself to have any special hereditary pirate powers?

BM: The ability to control parrots with your mind?

BM: A superhuman tolerance to rum?

BM: How about an unnatural, kryptonite-like susceptibility to dysentery?

BM: Ever been to Nombre de Dios?

AD: Do you have any other questions?

BM: Sure. The Russian computer game developer Akella is currently producing “Swashbucklers: The Legacy of Drake,” but as yet they have no plans to make you, the actual legacy of Drake, an option as a player character. How do you feel about that?

AD: What are you talking about?

BM: I’m just saying that as Drake’s heir, don’t you think I should be able to select you as my character when playing this game? 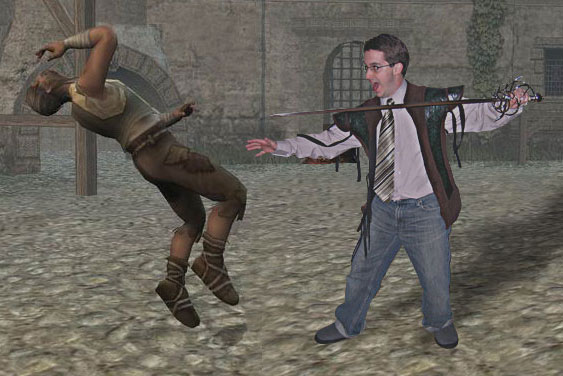 Artist's impression of Adam Drake as a player character in "Swashbucklers: The Legacy of Drake"

BM: I see. Let’s talk about the 1940 movie “The Sea Hawk”, in which Errol Flynn played a character that was blatantly ripped off your great uncle. How did he feel about that?

AD: Look, I really think I should be going.

BM: Wait, I have a whole series of questions about your family’s current relationship with Spain. Tell me, have there been any recent heated exchanges between yourself and King Juan Carlos?

[at this point our connection was unfortunately cut off. I tried to call back, but I guess he didn’t hear the phone ringing]

10 thoughts on “An Interview with Sir Francis Drake’s Descendent”