I recently had the opportunity to chat with Matt Stone – proprietor of Sea Wolf Clothing, and pirate-afficianado – in which we discussed several of the ways in which he indulges in piracy in his daily life, as well as the roots, soul, and future of his pirate business. 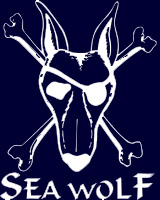 Bilgemunky: First off, could you tell me a little about Sea Wolf clothing?

Sea Wolf: Sea Wolf Pirate Apparel our motto is very true to who we are: “Made by Pirates for Pirates™.” We have been in business since 1990 and still attacking towns up and down every coast with all our SWAG from Infant to Unisex styles! What makes us unique is our own brand of Pirate artwork that tells a story in each design by world-renowned pirate artist Richard Becker. I of coarse design and conceptualize myself. We work well together as a team. I also contribute some art but none can compare to Richard Becker. Richard Becker has his own books, Pirate Tales, as well as contributing art to No Quarter Given Magazine, Pirates of the Caribbean movies, and contract work all around the world. Soon Richard will be contributing to Pirates Magazine

Bilgemunky: What did Richard do for the Pirates of the Caribbean Movies?

Sea Wolf: He did some conceptual art. In fact he had no idea to tell you the truth until he saw the DVD. It was the second DVD in the bonus features. His art is all over their story boards. He is working with them a bit more now as well. I do not know all the details of what he is doing now but I do know more conceptual art is in there. There is talk of much much more that I am not at liberty to discuss.

Bilgemunky: On the subject of PotC, Sea Wolf features a shirt titled “ello Poppet”, modeled by Lee Arenberg, the actor that played Pintel in the Disney movies. How did that connection come about? Was it through Richard, or some other means?

Sea Wolf: Lee Arenberg is a very good friend of mine. You can see him on our website. The artwork is representative of his character. In no way did we copy his character.

Bilgemunky: Many websites and companies hold interest for pirate reenactors, but there seems to be a growing market for “modern” pirates – those who embrace the jolly roger as a fashion icon. Do you look at piracy as simply a trendy theme, or is there more to it?

Sea Wolf: That’s a really good question – I hope it’s not a trend! There have been Pirate reenactors for a VERY long time. I am part of the Port Royal Privateers in Southern California. I must admit when I first started the company, there was no one like Sea Wolf around at all. We had no competition. There was no one doing it at the time other than Sea Wolf. But that also didn’t mean that we were making MILLIONS EITHER! We would go to Pirate Faires and Tall Ship Festivals and sell very well with the likes of pirates, but the general public took a long time to react Sea Wolf. Pirates weren’t alway the popular forum to be in. [But] that didn’t deter my dream at all because I believed in what I was doing and what we were offering. Then Cutthroat Island came out. That stirred up small storm towards Pirate Fashion.

Bilgemunky: We’re clearly in a deluge of popularity with all things pirate. This is naturally due to the Pirates of the Caribbean movies, but do you think there are any other factors at work in bringing pirates into mainstream popular culture?

Sea Wolf: Pirate Fashion! That is something I do want to address. I look at Sea Wolf as Fashion for Pirates! We are not a fly by night clothing company that jumps on a bandwagon. We aren’t a tourist type of company that has a few Pirate Designs. We don’t steal historical Pirate flag art and call it ours. We pride ourselves on being original. Everything we do has our Flag on it. The Sea Wolf logo is our flag! Every Pirate had it’s coat of arms as it were. I have the Sea Wolf logo as mine.

Bilgemunky: How did the Sea Wolf logo come about?

Sea Wolf: Funny you should ask. It’s a bit long. The first dog I can remember seeing in my life was my Grandparents’ German Shepherd, Gretta. Gretta and I were inseparable. She cared for me as if I were her own. I rode on her back etc. etc. She wouldn’t let anyone near me. Gretta passed and I made my parents get me a German Shepherd. Crusader was his name. Crusader was hanging out in my office with me while I was trying to come up with a name to call my company. I didn’t want to be cliche or obvious. I started going through many of my books on Pirates. I looked for other names they would call Pirates. Sea Dog, Sea Rover, Sea Wolf. I looked at my German Shepherd and said, “Sea Wolf. THAT’S IT!” After all, a German Shepherd is a direct descendant of the Wolf. I thought more and more to what my German Shepherd/Wolf meant to me. Nobility, strength, carrying, nurturing, FREE, independent, cunning, the list goes on. So why wouldn’t someone want all these things to be a part of their coat of arms? So no sooner than when I came up with the name, I came up with the logo. The skull and crossed bones needed a new face! The face of a german shepherd – The FACE OF A WOLF! So it’s a pun of sorts. I still have my German Shepherds. Crusader is long since gone, may he R.I.P. But I have Captain Every and First Mate: Israel Hands. Captain Every just turned 11 last week. His mother passed on some time ago. Her name was Captain Morgan no less. We had a hard time coming up with names for Israel. But Every needed a Mate so we thought of the best first mate, Israel Hands, Blackbeard’s mate. They sit here beside me every day in my office and they carry on the Sea Wolf legacy.

Bilgemunky: So aside from running a pirate themed business, in what other ways do you live the “pirate’s life”?

Sea Wolf: Aside from being a member of the Port Royal Privateers, I [also] sail on tall ships. That is very important to me. I have sailed on many tall ships. The Schooner Lynx and the Argus are both ships I am a part of. The Argus unfortunately was decommissioned as of this year. This was a very important ship to me. I serve on the Friends of Argus board as the Commodore. The Argus just turned 100 years old and is a Topsail Ketch from Marstal Denmark. She served the Sea Base and the Boy Scouts of America for many years. It was a training vessel in which Boy Scout troops would take weekend or 5 day trips. We would train the kids on the history of tall ship sailing, teach them how to sail the ship, and teach them yarns and chanteys. I have been a sailor almost all my life. It was when I was 10 years old when I was taken on the Pilgrim in Dana Point. We stayed overnight on her. Pilgrim is a replica of Richard Henry Dana’s ship and [was featured in] the book Two Years Before The Mast. That is when I was bit by the Tall Ship BUG! The Argus was an important program to myself and many others, because we touched so many kids lives – much like when I was young and I went on my own first tall ship. At night I always spun a few yarns about a few pirates like Blackbeard, Captain Morgan, and Calico Jack.

Bilgemunky: You mentioned the Schooner Lynx – could you tell us more about her?

Sea Wolf: The Lynx is a newer ship. I think she is 6 or 7 years old now. My wife would call it the, “5 star hotel of Tall Ships” She is a Topsail Schooner. She too is for training and creating tall ship awareness. She takes a few kids every year to Hawaii from its home port in Newport Beach California – also where the Argus was berthed. They teach a curriculum while under way with a certified classroom teacher as well as learning the ropes, as it where – or maybe I should say lines. Very few ropes on a Tall Ship ya know.

I got involved with the Lynx a few years back when a friend of mine and I were helping out a young man for the Create A Wish Foundation. You know what that is for – terminally ill youth. His wish was to be an 18th century pirate. So my friend Duane (Captain Bouchard,) The Lynx, and the tall ship Spirit of Dana Point, and I granted the young man’s wish. We dressed him up in pirate clothing and took him out for a battle sail and an on deck sword fight. Guns ‘a blastin and all! It was GREAT! To see the look on the kids face was incredible – it warms your soul. But that is also where I met the owner of the Lynx’s son, Jeff Woods. Jeff soon got me to Crew on his ship under one of the greatest tall ship captains I know, Captain Doug. That ship is FAST and Captain Doug knows how to sail her. We would just await his orders. Battle sails on her are unbelievable. There are 4 Six pound carronades as well 4 half pound swivel guns.

Bilgemunky: What’s next for yourself and Sea Wolf Clothing? Any plans in the works for new product lines or other exciting developments?

Sea Wolf: We are always thinking of our next move and of expansion. Our most recent venture is our Sea Pup line for infants and toddlers. We have onesies, bibs, and T’s. We always try to stay ahead on the all the trends. The horizon looks bright for Sea Wolf and we are here for the pirates and lubbers alike. We are always here for YOU – because it’s the pirates that make us possible. I also want to thank everyone who has ever supported Sea Wolf. Check us out at www.seawolfonline.com. Sign up on our contact list and be a member of the Sea Wolf crew. We will keep you all up to date on where we will be, what Pirate Faires, and new additions to our site.