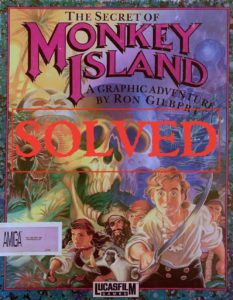 So, back to square one, with little-to-no hope of learning the secret. BUT… then I made a discovery that blew the lid off the whole affair—the final piece of the enigma that is Monkey Island. Yes, it’s big. Yes, it’s devious. And yes, Ron Gilbert has pulled a sneaky. Perhaps the greatest sneaky of all time.

Consider: a good-natured, awkward, scrawny lad finds himself thrust into a life of piracy. He negotiates with a table full of very important pirates. He fights off seadogs and learns he has more wit than swordsmanship. He performs theatrical musical numbers. And, while it may not have started that way, in the end it’s all about breaking up his true love’s wedding to a scoundrel. But I’m not describing Monkey Island. I’m talking about the 1951 musical romantic comedy Double Crossbones.

Ron Gilbert has often referenced two primary inspirations to The Secret of Monkey Island. The first is Disney’s Pirates of the Caribbean ride, and the second is On Stranger Tides by Tim Powers (not to be confused with the Disney movie of the same name). But in watching Double Crossbones, the similarities it shares with Monkey Island leave those other two in the dust.

My suspicions were first stirred when I noticed the movie’s hero, Davey Crandall, bore a striking resemblance to the original 8-bit Guybrush Threepwood, both in mannerisms and appearance: 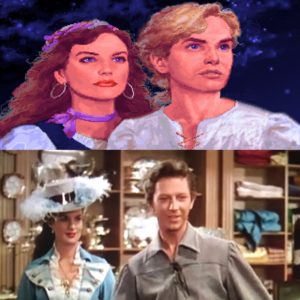 With that curly, sandy hair pulled into a small pony tail, the lace front shirt, and good-natured innocence—you really couldn’t have cast a more perfect Guybrush. But it doesn’t end there. When he bumbles his way into a swordfight with some local pirates, Davey soon finds his ego and sense of panache getting the better of him as he hurls boasts while waving his feather duster (sorry, broom) with newfound flair. 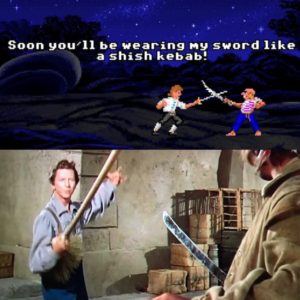 He also must appeal to a table full of very important pirate leaders, complete with their color-coordinated outfits:

And then there’s this guy: 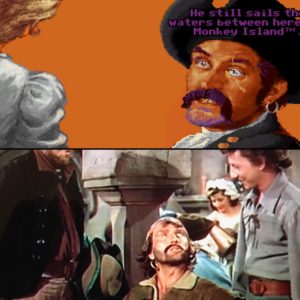 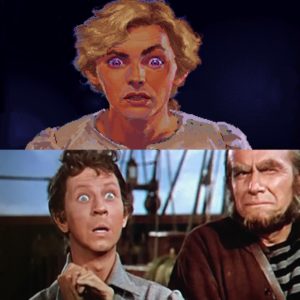 Admittedly, the story itself isn’t that of Monkey Island 1 or 2. No monkeys at all, in fact. But there’s loads of trickery and problem solving that’s lock-step with Monkey Island’s style and humor. Things like when Davey takes advantage of a rum allergy to force himself to break into hives so he can fake having the plague. Or when he has tiny ships painted on the outer lens of a telescope to make the governor think a pirate fleet is sailing into port. Or when he does an elaborate, improvised song and dance routine for a tavern full of pirates to earn passage aboard a ship. Really, the list goes on. Lots of stuff going on here—and all of it sounding like it’s straight from a Monkey Island storyline.

If I’m on to something and Double Crossbones is in fact connected to Monkey Island somehow, that’s clearly A secret, but what’s THE secret? To figure this, we need to remember that, despite the clear similarities, Ron Gilbert has never once suggested taking any inspiration from Double Crossbones. We also need to remember that, when asked if we would ever learn the truth of Monkey Island in the above-linked interview, his response was simply:

With this in mind, I think the true secret becomes obvious. If Double Crossbones didn’t inspire the first two Monkey Island games—then it must conclude them.

Simply put, Ron Gilbert is a time traveller. And Double Crossbones, released nearly four decades before The Secret of Monkey Island, is his third and final installment to the Monkey Island Trilogy. It may sound incredible, but allow me to paraphrase Spock paraphrasing Sherlock: If you eliminate the impossible, whatever’s left, however improbable, must be the truth.

Seems to me, Ron Gilbert has practically admitted to time travel already. And when set alongside the other evidence, I think Double Crossbones’ status as the true conclusion to Monkey Island, and the true SECRET of Monkey Island, is a clear forgone conclusion.

1 thought on “Secret of Monkey Island – SOLVED (for realz this time.)”