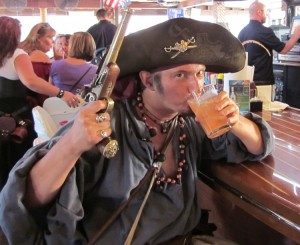 As I understand it, the Fort Myers Beach Pirate Festival has a checkered past. What was once a grand affair then fell on hard times, and it was debatable whether or not a 2010 Festival was even worth the trouble. But, after assigning a new management team to the project, Fort Myers Beach decided to give the fest on more go before calling it quits – and all the better for us. From where I sat, the Fort Myers Beach Pirate Festival 2010 couldn’t have gone more swimmingly. Great weather, great location, and thousands of pirates; both long-term and weekender. 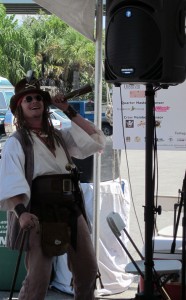 Sometimes the music just ain't loud enough, and that's why man invented those ear-cone things you usually only see in cartoons but occasionally at pirate festivals. Yeah.

I arrived in Fort Myers Beach on Friday, and was instantly taken with how the town was essentially what would happen if Jimmy Buffet and Tommy Bahama had some sort of love-child that was then raised by Trader Vic – meaning it was a beach-themed tourist trap in every awesome sense of the word. Giant plastic sharks, surf shops with names like “Smugglers Cove” or “Barnacle Gary” (I made that second one up, but you get the point.) In short, this was a town custom designed to embrace pirate fun, and they did so in no small reserve.

Friday evening began with the opening of the weekend-long pub crawl. Participants could purchase a leather medallion and a series of coupons – most of which were good for one free drink – to entice them to travel the area and sample the town’s large selection of tiki bars, oyster bars, yacht bars, and so forth. From jello shots to pirate punch, the variety of freebies was pretty impressive – and even more-so as more pirates joined in and slowly took over the area. But even the non-pirate patrons quickly got into the act, either with their own costume hats and eye-patches, or simply through enthusiastic “yarrrs” at every turn – piracy was indeed in the air.

Later in the evening was the opening bash, held at a place called “Uglies”, and complete with hors d’evours, musical entertainment by For Love or Money, and a pirate costume contest. Actually, the contest itself was a bit disheveled, but I don’t think anyone felt much need to complain as the night was really far more about hanging with fellow pirates and enjoying some piratey drinks. 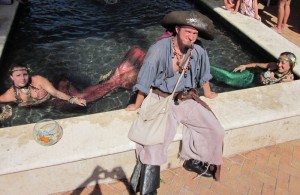 Bilgemunky poses with the weirdest looking manatees he's ever seen.

Saturday morning saw the festival start up in full swing, with pirate vendors and encampments set up on Main Street (actually, it was Old San Carlos Blvd, but it felt like a Main St.) The shopping selection was pretty decent – you of course had some of the usual pirate plastic tourist junk, but there was also some fine leatherwork and pottery available. Entertainment came in the form of historical reenactors providing weapons demos, mermaids in the town fountain, a pirate stilt walker, some Jack Sparrow impersonators (not sure if they were officially part of the festival, but present just the same), and of course a fine selection of pirate music. For Love or Money offered some instrumental shanties, while Celtic Mayhem also brought some fine traditional tunes. Captain Dan and the Scurvy Crew, however, took a different direction with their rousing pirate rap. A definite crowd favorite, pirates and civilians alike were bouncing to the likes of “Hook it Up” and “Real Swashbucklers.” Between the live performances I blasted a wide selection of pirate tunes, ranging from Abney Park and the Salt Sea Pirates to Bounding Main and The Pirates Charles. 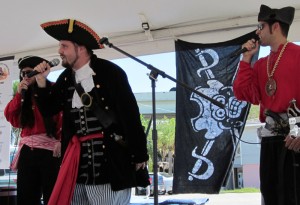 Captain Dan and his Scurvy Crew rock the tent while the Bilgemunky Flag waves bravely in the background.

Saturday night was a bit more of an open format, with pirates welcome at the various nearby bars and restaurants. But several of us found our way onto the For Myers Beach Princess for a sunset cruise. I’d been invited to do the Pirate DJ thing while underway, and the mostly-civilian crowd proved remarkably receptive to dancing to pirate music. I even entertained several requests and dedications. About halfway through the cruise the mob got a little restless with the usual shanties and Pirate-Core, and so we switched to some remixed pirate dance beats, which got the boat truly hopping.

Sunday offered much the same as did Saturday by way of the festival. It was a nice chance to wind down from a busy Saturday, as well as to knock off a few more pub crawl destinations.

When normal folk (especially normal folk in bikinis) feel the need to don pirate hats, it's a beautiful thing.

Fort Myers Beach was a town that truly embraces the fun of piracy, and God bless ’em for it. The festival was a grand time, and provided a fine “ground zero” for pirate happenings. But even straying several blocks from the festival grounds to bars and restaurants with no official affiliation, I still found bartenders in eye patches and tourists and locals alike in skull-spotted bandannas. There’s just something magical about seeing people of all walks of life coming together under the Jolly Roger to hoist a grog together.