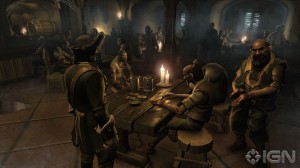 This picture is of a tavern, in case you couldn’t tell. Also, since some readers haven’t figured it out yet, clicking the image will make it bigger, so you can bask in the glorious detail. You can almost smell the rum – which, despite this being a Disney title, strangely indeed smells of rum – musky and deadly. 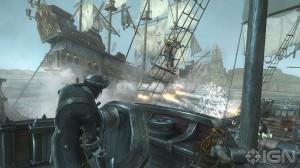 This, I’m told, is a screenshot. But it looks more like a watercolor to me. If this is actually a scene from a fully animated part of the game, then Disney must be cavorting with demons to garner this sort of power. And hey, check out the chick in the lower right – unlike most videogame pirate chicks, she actually looks mean and sexy all at once, and not in that cgi, glassy-eyed uncanny valley sort of way. 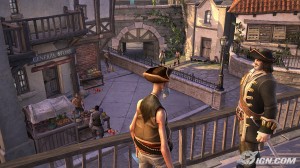 A bird’s eye view of the village, which goes to such detail as to include a pirate passed out in his own drool. You just know he’s going to wake up to discover that he’s been tagged in like, fifty Facebook photos, with all sorts of embarrassing captions. I feel his pain. 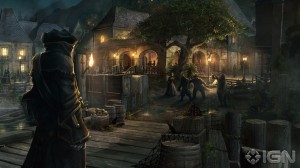 And last we have a picture of what I assume is the protagonist of the story about to meet up with a bunch of unsavory scallyawags in a dark alley. In my experience such scallywags will most likely want to pose with you for a hundred or so photos (three with the girlfriend, two with the couple, eight with the girlfriend’s mother who isn’t sure why she agreed to come to a pirate festival, etc.) Or maybe they just hope to kill him for his boots – it’s a Disney game, so anything is possible.

Hey, did I say that was the last picture? I lied – there are actually many, many more, but to see them you really should visit the IGN page where I stole these ones from. Read the article too – you might learn something. And thanks for the heads up on this story goes out to Redbeard, who keeps asking why I don’t review more pirate video games, but who also still refuses to buy me an X-Box.

First Look at Pirates of the Caribbean: Armada of the Damned – Xbox 360 Preview at IGN.

5 thoughts on “Micky Said the “D” Word – Pirates of the Caribbean: Armada of the Damned.”