On Wednesday November 19th at 3 p.m. CST, the Moll Flanders Tavern will be hosting a pirate party DJed by none other than Bilgemunky of Bilgemunky Radio. You’re all invited, and you won’t even have to leave the comfort of your own home! 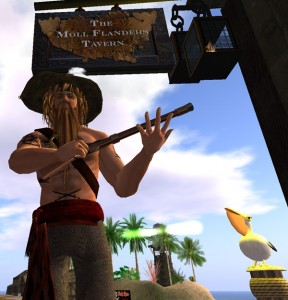 OK, here’s what you’re all going to do – and don’t laugh cuz I’d dead serious. Go to www.secondlife.com, create an account and install the game. This is all free. Then, run through the tutorial. Once acclimated, do a people search for Bilgemunky Mizin – that’s me ingame – and ask to be my friend. We’ll then get you signed aboard with my crew, The Bilgemunky Knife Fighters. And that’s it – you’re a Second Life pirate (although you might want to find some piratey clothes to complete things.)

I’ve never spent much time in Second Life until just recently. And now that I’ve looked around a bit, all I can say is… wow! Entire worlds of pirate towns – seaside taverns, ship battles, mermaids – it’s all here. And the best part? You can actually hang out with your real-life pirate buddies that you only see a few times a year. Kick back, chat (voice is available, thus freeing your hands to hold your rum), and then maybe go duke it out with cannons for a larf. Actually, the only problem is… not enough pirates. Perfect pirate online towns, taverns, and docks just aching for the right blokes and lasses to take the place over.

If you can, join us on the 19th. The party begins at 3 p.m. CST and will continue at least two hours. But don’t wait until then to first log on as you’ll want some time to familiarize yourself with the interface (and, as stated, find some nice pirate clothes.) But even if you can’t make this party, I’m certain it will be the first of many. So jump into Second Life anyways and look me up!