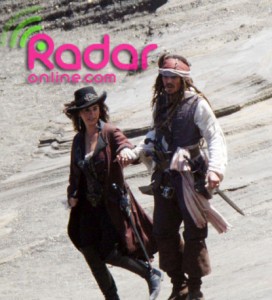 Call me a cynic, but this shot of Angelica really dissappoints me.Although varying in quality in many respects, the one thing the first three films remained truly consistent on was the development of unique, compelling costumes/characters. And this? It looks like Cruz just walked last minute onto the set, sat through a quickie Revlon hair&makeup session, and then threw on a borrowed hat and coat from any of a thousand pirate festival-goers. Seriously, I’d call it dreadfully half-assed looking. But I’ll also reserve final judgement, because in this matter Disney has some real street cred. It might turn out this is only a partial costume test-shot, or maybe the strength of the character will balance out the costume’s apparent shortcomings, or maybe it’s not even the actual costume at all (prior to PotC3, a genuine hoax shot was created by Disney, showing “Captain Teague” dressed as a Jack Sparrow clone. Dreadful, but funny.)

Ok, enough about Cruz’s dubious new pirate look – of far more interest to me is this one of Geoffrey Rush as Captain Barbossa: 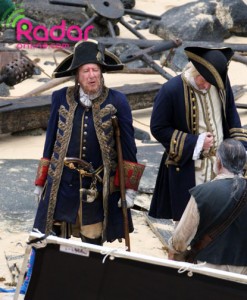 So what’s so interesting about this picture? Well, aside from the obvious question of why Barbossa’s in uniform (my guess is trickery), what really has me wondering is why he has a crutch beneath his left arm, a la Long John Silver. His feet aren’t fully seen in this picture, so it’s hard to say much. Maybe the crutch is just a part of his disguise, maybe he stubbed a toe. Or maybe our dear Barbossa must contend with the loss of a drumstick in this fourth film?