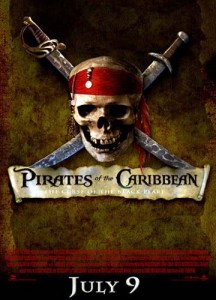 And then Dead Man’s Chest went all mysterious and tribal on us with the crossed torches and voodoo danglies: 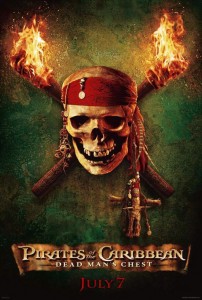 Finally (well, sort of) At World’s End gave us an Asian format with crossed bones, rich tapestries, Jack’s crazy ghoat, and Singapore lettering (I suddenly wonder what they say?):

Well, it was inevitable that the next Pirates flick would have its own Jolly Roger to sport. And thanks to my extensive network of Bilgemunky Spies (actually, I found it at Collider.com), we now have a sneak peek…

If you click, you’ll see a slightly larger version. And yeah, it seems to basically be the World’s End logo with water falling out its eye. Which doesn’t exactly bowl me over. I guess after three films under their belt, it can be difficult finding new and clever ways to expand on the Jolly Roger motif – let’s just hope their creativity chops are more sound with the flick itself. And yeah, “Rob Marshall’s Pirates of the Caribbean” still sounds really weird to me.