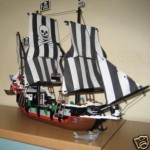 Since we’re already kickin’ it old school with news of Monkey Island, why not throw in some Legos as well? Why Lego ever decided to retire their pirate line is anyone’s guess (my guess: hardcore drugs), but it seems they’ve finally wised up with this re-release: http://shop.lego.com/ByTheme/Leaf.aspx?cn=554&d=70

Most are actually new kits altogether (and the pirates look noticeably meaner than in the old days.) Although the Bounty ship does seem rather familiar – actually, my favorite was always the Skull’s Eye Schooner. I thought about digging my own Skull Eye from the attic to assmble and take a nice picture to include with this post, but decided to take the easy route and steal an image from another site – in this case www.classic-pirates.com. Yes, it’s a site dedicated to Lego Pirates. Who knew such a thing existed? Well, we now we all know.

So Monkey Island is back, Lego Pirates are back – if we can only get the Las Vegas “TI” to return itself to “Treasure Island” and restore the old pirate decor, we’d be three for three.

8 thoughts on “The Lego Pirates Strike Back”