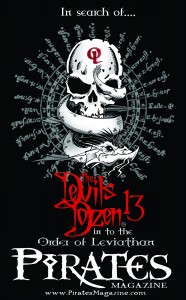 Here’s how the contest works:
If you’re part of a cosplay pirate crew, parade group or a pirate reenactor, send in a photo of your captain along with a short paragraph about him (or her). The editors of Pirates magazine will pick twelve captains from east of the Mississippi and twelve captains from west of the Mississippi (Aye, we’re splittin’ the world right in half like a cutlass through a cooked goose!) to comprise a total of 24 captains from which 13 proud pirates will be picked by their peers and the readers of Pirates magazine via www.piratesmagazine.com. So e-mail a photo and paragraph about your captain to me at: davenichols@piratesmagazine.com

Watch the Summer 2009 issue of Pirates Magazine to see the 24 captains chosen for step one of this here contest and we’ll fill you in on how you can help pick the final 13!

The identities of the Pirates Magazine “Devil’s Dozen” for 2010 will be revealed at a lavish pirate banquet during next April’s “Fells Point Privateer Day” in Baltimore, Maryland.

If chosen, you will receive that rarest of all prizes, the Pirates Magazine Devil’s Dozen sterling silver ring by Skinny Dog Designs, makers of the Pirates of the Caribbean rings for Disney!

Remember, you must travel to and attend the Fells Point gathering (at your own cost) next year to become one of the “Devil’s Dozen”, and must be willing and able to vote on important issues in the pirate community such as the naming of the 13th member of this foul company. We’ll also present the Pirates Magazine Pirate of the Year for 2010 with “THE GOLDEN HOOK” award!

Sound intriguing? Just think, as one of The “Devil’s Dozen” ye’ll go down in history without having to swing from a gibbet. You’ll also appear on the Pirates Magazine masthead in our prestigious “Order of Leviathan”. So get busy and send in a photo and bio on your captain today so we can run this killer contest up the main mast.

A Custom Sword Cutlass by the Famous Tony Swatton of www.swordandstone.com and one from renowned Matt Stagmer of Baltimore Knife & Sword www.baltimoreknife.com will be presented to the “Devil’s Dozen” and they will then roll dice in pirate fashion for these blades! This is going to be a high quality yearly event, don’t miss the ship on this!

Welcome ye to the “Order of Leviathan” if ye dare!

Keep an eye out, mates – we’ll surely be talking about this more as it comes to fruition. Meantime, these prizes sound pretty sweet. If you think you’re a pirate worth such honor and booty, make sure to get your name in the running 😉

1 thought on “The Search for the Devil’s Dozen”