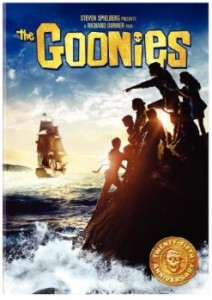 Pretty sweet looking, actually – The Goonies 25th year anniversary edition will not only include the Blu-Ray disc, but also a boardgame, and a whole bunch of other crap. I wish I could be more specific, but the Amazon.com description offers nothing except a summary of the movie and a picture of the extras. Looks like some magazines of some kind, some collector cards maybe, and a femur from One-Eyed Willy (ok, I made that one up.

Still, should be slick. There’s nothing like combining your love of piracy with the nostalgia of being a child of the 80’s, and no one does that better than The Goonies.