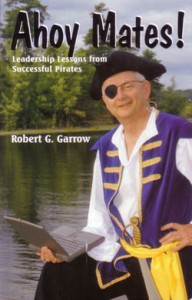 When I first spied this book, its cover adorned with the photo of author Robert G. Garrow dressed as a plastic-sword wielding bucanneer along with a title claiming it will teach me all about leadership as demonstrated by pirates, an obvious question formed in my head – namely, “he can’t be serious, can he?”

Surprisingly, although much of the book’s tone is light and humorous, Garrow does in fact seriously tackle the basics of leadership, from the very beginings of planning a mission statement to the more involved methods of inspiring your underlings to perform their best. And Garrow very much uses the themes of piracy throughout as readers observe the recruiting of crews, setting of ship’s articles, formation of strategies, implimentation of tactics – it’s all here, and it’s all plainly spelled out and then applied to the modern business world.

Those who’ve read leadership primers before will find themselves largely in familiar territory – I myself distinctly remember covering similar material during Petty Officer indoctrination back in the Navy. But likely you’ve never before approached this topic from the pirate perspective. And while Garrow doesn’t exactly make mention of ALL pirate leadership styles (Blackbeard’s habit of randomly shooting a crew member now and then to keep everyone on their toes, for examply, is notably absent) he does a fine job of demonstrating how the skills of our piratical fore-fathers have applications today.

Ahoy Mates! is a well written and breezy read. And aside from a superfluous epilogue seemingly present for the mere purpose of allowing Garrow to take a pot-shot at the Bush Administration, it stays true to its purpose from beginning to end. Its light tone might come across as a bit simplified to some, but its lessons are valid to us all. And the easy, fun style may well come as a refreshing change for budding leaders up to their ears in dryly conventional textbooks, manuals, and group outings.