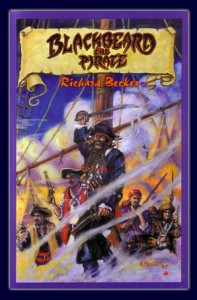 In a world where pirate comic books come and go – frequently dying off before they have a chance to find their footing (R.I.P. El Cazador and Scurvy Dogs), it’s refreshing to note that Bloodthirsty Pirate Tales, being the well researched, historically accurate comic-book telling of Blackbeard’s story, lasted a full eight years from beginning to end. There’s only one problem – it came and went well before the current boom in pirate popularity.

The complete series of Bloodthirsty Pirate Tales is still available, but it’s a pricey lot, and supplies are surely limited. That’s why it’s so great to learn that the series is now available as a collection graphic novel, titled Blackbeard the Pirate. It’s not a complete collection – all of the non-blackbeard short stories are missing, as is much of the additional artwork. But for those who want the gist of the Blackbeard element that dominated the series can now do so at a fraction of the cost.

Blackbeard the Pirate is a black and white visual telling of Blackbeard’s entire career, from beginning to bloody end. This makes up the lion’s share of the book, with the final portion including mini-stories and fun facts regarding the fate of Blackbeard’s skull, the weapons and ships of his time, his own Queen Anne’s Revenge, and additonal Blackbeard artwork. The collection is a fabulous source for those wishing to know more of the most famous of all pirates, but who don’t want to get bogged down in a dull history novel. But true history buffs may find it entertaining as well – without grating at their nerves. This is because this comic is not only very historically accurate, but in many cases sources are cited at the bottom of the page. Pirates are so much the stuff of legend, and so few books make the true effort to “get it right”, that it’s both surprising and refreshing to see a comic book fighting the good fight.

Owners of the original Bloodthirsty Pirate Tales won’t find much new here, if anything. But it is nice to have Blackbeard’s story so convenienty compiled into a single binding. And anyone that isn’t so luck as to have the original series on hand will surely find this graphic novel a fine addition to their pirate collection.