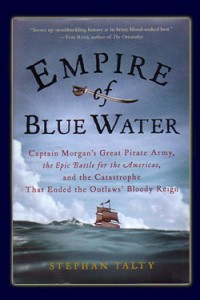 Captain Morgan – we’ve heard the name, drank the rum, but how much do we actually know about the guy? Actually, unlike with many pirates, quite a lot is known about Henry Morgan. His exploits are exceedingly well documented. And in Empire of Blue Water, author Stephan Talty does a splendid job of relaying Morgan’s adventures in a manner that’s both detailed and entertaining.

In truth, the story of Captain Morgan is larger than the man himself. His is the story of the buccaneers – desperate men driven as much by hatred of spanish oppression as they were lust for gold. But while they share the same story, Morgan was an exceptional figure, and telling a tale from his perspective alone would leave many gaps. Talty resolves this dilemma by including a parallel story throughout – that of Roderick, being the epitomized “everyman” buccaneer serving under Morgan’s command. In this way, Roderick serves to better represent the fuller story of the buccaneers, while his typical life contrasts with and highlights Morgan’s much more atypical fate.

Morgan’s story is also the story of Jamaica – a relatively inconsequential island until ushered to greatness by Morgan and his buccaneers, and then tumbling backwards shortly after Morgan’s demise. Jamaica served for a time as a keystone figure in world politics and economy – ironic considering that it was also its day’s Sodom and Gomorrah. Both the trade and sin capitol of the new world, the story of Jamaica itself is every bit as fascinating as Morgan’s own, and the two are entirely intertwined.

Empire of Blue Water follows Morgan and his men from their humble beginnings through their rise as national heroes and to their eventual decline to simple outlaws. The battles, strategies, and circumstances are all described in very human terms – this reads like a story, not a textbook. And yet, the information contained therein is astounding. The politics and culture of the day were the products of centuries of history, and manipulated by forces large and small, ranging from Kings and Queens to thieves and whores. Talty paints the picture in its entirety, illuminating the full story in all its astounding, sordid detail.

I generally don’t give away a book’s ending, but I think it’s safe to assume most readers already know that Henry Morgan is long dead, and that following his death, Port Royal was struck by an earthquake. For all that was amazing about Morgan, he was still merely human, and paled in comparison to the raw power unleashed by nature on his home port. The description of what the townspeople experienced in a very few minutes of earthquake is nothing short of awe inspiring – terrible, humorous, and baffling. The “wrath of God” is an oft used phrase, but seldom is it so vividly portrayed.

An astounding read, and a must for anyone wishing to get a true grasp of this pirate of truly legendary proportions.