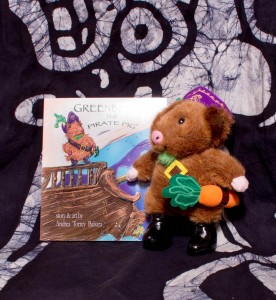 All educational and child-rearing specialists agree on the importance of reading to your kids about pirates from an early age. But they sometimes forget to mention that sharing the true exploits of François l’Olonnais with an impressionable toddler can lead to less-than-desireable results. This is why we need books like Greenbeard the Pirate Pig to ease our youngsters into the basics of high seas shenanigans without prematurely exposing them to more advanced subjects (like cannibalism.)

This is a story of a Guinea Pig with a green beard. That fact alone should probably have told him he was destined for pirateyness, but it’s not until he smells the salt air that Greenbeard decides to give up farming and take up marauding (in a friendly way, of course.) He finds a boat, makes a friend or two, and sails off to…

…well, that’s the part that your kids will have to figure out for themselves. This book is an origin tale, and doesn’t go into what happens later (although there’s a sequel in the works.) But meantime, Greenbeard the Pirate Pig comes packaged with a plushy of Greenbeard himself, complete with carrot and purple pirate hat. This way your young scoundrels can take him with them on their adventures, such as ball games or raiding Maracaibo (depending on whether you’re a normal parent or an AWESOME parent.)

I’ve used a lot of parentheses this review. Sorry about that but I’ve been laying low and built up a bit of a backlog of them.

Greenbeard the Pirate Pig is a fun children’s book with neat illustrations and its own pirate song. It even has the musical notes, so if your kid can read music they can tell you that you’re singing it wrong. The included pirate stuffed animal really makes the whole package gift-worthy for the young scalliwag in your life, so check it out.