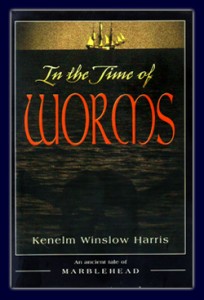 If I summarize In the Time of Worms, it will sound like a simplistic fairy tale. You’ll probably roll your eyes as I talk about this story of a psychiatrist who learns there’s a band of pirates living in his closet. See? It sounds silly. But that’s only because within this review I lack the space or the talent to recreate this tale with the same compelling artistry of Ken Harris, the book’s author. But I’ll give it a shot, just the same.

Max Blessing has recently moved to a sleepy New England town (not too far from where I grew up, in fact – how’s that for a Bilgemunky fun-fact?). And yes, he discovers pirates living in his closet. Well, sort of – the actual truth of the matter is that his closet is connected to something of a time portal, which leads to a series of caves, which are inhabited by pirates. Clear now?

Actually, you shouldn’t be clear, as this book is something of a mystery – and I don’t wish to divulge more than I should. But in unraveling this mystery for yourself, you’ll find that this seemingly rediculous situation is handled with great care by the author and the characters within the tale, making the implausible seem just this side of possible. As an added bonus, several of the pirates are treated to fascinating yet diverse background stories, fleshing out these characters with just enough seasoning to make you wish they each had a novel in themselves. Were this a truly thorough review, I would tell you more. But this book is about the journey and the discovery, and I’d rather not spoil the fun.

Having finished reading In the Time of Worms, I can’t say I’m sure where it was meant to lead, as it all feels like the beginning of a larger tale, rather than a complete story on its own. But whether Harris has more in store, or if he simply intended to plant a seed in the readers’ imaginations and let us each draw our own conclusions, it’s nonetheless a fascinating read, and well worth checking out.

In the Time of Worms has a supplimental website. Like your typical episode of Lost, it has only a snippet or two of hard data, padded with loads of oddities with no real answers. Time will tell whether it’s just a teaser, or if there’s a larger master plan in the works (I’m banking on the latter.)

Note: In the Time of Worms is due for national release in April 2007. Until then, autographed copies can be ordered through www.inthetimeofworms.com.

2 thoughts on “Review: In the Time of Worms”