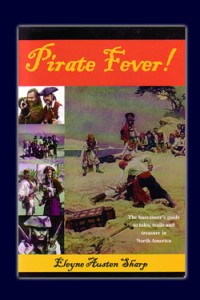 Pirate Fever! seems intended as a reference for all things pirate, ranging from historical biographies, contemporary interviews of modern-day pirate VIPs (store owners, band members, webmasters, etc.), a pirate-speak dictionary and recipies, weblinks, movie lists, book lists – quite literally a starting point for anyone looking to learn anything about pirates. In any hands such a comprehensive book would be a daunting task – but in this case, sadly, the product is something of a mess.

The effort first breaks down in the writing – this book is entirely transcribed in pirate speak, wi’ the sort’a ‘bbreviations ‘n linguistic anom’lies tha ye may be ‘ccostumed ter hearin’ at a pirate fest’val, but wha’ kin get awfully tedius ‘n print, savvy? Standing alone, this could be a significant – but not fatal – shortcoming. However, Pirate Fever! also suffers from poor editing and poor fact checking.

Many books tackling historical matters contain errors, and even the best can result in rousing debate amongst history buffs. But any book that would offer the lyrics of the song “Captain Kidd” as being the condememned pirate’s actual last words is bound to be held suspect (Kidd maintained his innocence to the end – the notion that this notably unpoetic Scot would confess in prose with his dying breath is just plain silly.) This sort of glaring error is repeatedly evident throughout Pirate Fever!, as interviews are mis-quoted and misrepresented, performance groups listed as residing in the wrong state, and major pirate websites mis-titled. I’m personally aquainted with a few of the interviewees and subjects addressed, and noticed several immediate errors. As such, I can’t feel confident that the other material – with which I might be less directly familiar – is itself accurate, and wouldn’t advise taking the information on face-value.

Pirate-speak aside, Pirate Fever! could have been a small almanac for all things pirate. But its numerous errors require a cautious reader. And even then, the simple fact is that most of the material therein is readily available to anyone with an internet connection – one need only google “historical pirates”, “pirate books”, or “pirate movies” to get this same data in an instant. Pirate Fever!’s only real original content lies within the interviews. These can prove interesting, but – like the rest of the book – must also be taken with some patience and a grain of salt, as they are largely (and sometimes innaccurately) paraphrased in pirate-speak.