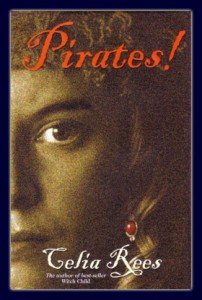 Upon finishing it, I could only laugh. Celia Rees played me from begining to end, thrilling me with victories, unnerving me with suspense, and gripping my attention to such degree as to be nearly painful. This book is bold, brutal, and brilliant.

To attempt to explain the story is to do an injustice, as I can’t possibly convey the tone or the atmosphere. Set in the 1700’s, Pirates! follows the exploits of a misused heiress and her escaped slave companion as they merely seek a place for themselves in a world that has exhausted most all options. They find a home amongst pirates, both savage and noble. But the story isn’t in the plot, it’s in the characters. While reading, I shared a genuine and deep affection for the heroines, Nancy and Minerva. They have fears and hopes. Hatred and love. And as in life, sometimes the boundries from one to the other are terribly unclear. Ceelia Rees conveys both the glory and the suffering that accompanies a pirate’s life, and she does so with a vivid detail that is absolutely mind-boggling. Most dramatic pirate fiction comes across as either candy-coated or needlessly graphic, but Rees manages to strike that perfect balance, inspiring both disgust and admiration, and making you crave more of each.

The world is full of pirate novels, and I’ve still many, many to read. But thus far, very few have been truly, utterly brilliant. Not since Treasure Island have I been so completely immersed and engrossed. I found Pirates! in the young adult section of my book store, but don’t be fooled. This is a classic of literature, and should be sought out by all that adore pirates.