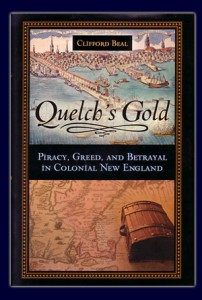 John Quelch was in many ways the very embodiment of a 1704 pirate. Beginning as a legal privateer, he followed much in the footsteps of his more famous predecessor Captain Kidd as he abandoned the terms of his commission in favor of hunting more lucrative prey. The evidence is pretty clear, and quite damning. That Quelch and his men, armed with a Letter of Marque to hunt the French in the Northern Atlantic instead headed south to Brazil to plunder Portuguese gold is pretty much beyond question. And yet, in the eyes of history this is far from an open-and-shut case, leaving many questions.

Quelch and his men seemed content to make a run of a single crime-spree. They then returned to their home port, presemably to return to their old lives (albiet a good deal richer.) And yet, they made only scant effort at concealing the source of their newfound wealth, soon resulting in the strong hand of the law intervening. Why Quelch and his men covered their tracks so poorly – indeed, why they returned at all to the port most likely to sniff out the obvious flaws in their hasty alibis, is a matter for speculation. But even moreso are the methods used by the authorities to convict and condemn Quelch and his crew.

In a time when local authorities not only dealt with punishing pirates, but also frequently had great latitude in the usage of seized plunder, it’s easy to draw the parallel of the government “stealing” that which was already stolen (sometimes by better, certainly by bolder men) – this holds especially true in cases where legal corners were cut, dubious procedures enacted, and legislative processes selectively utilized or ignored, depending on what best served the prosecution’s cause. Like the case of Captain Kidd three years before, it’s clear that laws were broken and booty was plundered, but it’s less clear who was the greater criminal – the pirate, or the authorities that executed him.

1704 New England was showing signs of unrest beneath England’s rule. The Revolution was nearly a century away, but already resentment was growing at seeing colonial citizens convicted by “foreign” authority. Quelch’s own trial and execution were met with local anger, and certainly contributed to undercurrents of rebellion that were brewing.

“Quelch’s Gold” is an excellent read – a pirate tale from beginning to end, but also one that has strong links to the early American spirit. Sometimes it’s difficult to see how events from 300 years ago had their affect on our present world, but author Clifford Beal crafts a story that feels at once historical yet entirely relevant. The events leading up to Quelch’s voyage, the conquests he achieved during that voyage, and the reception upon returning home are all retold in exception detail, while remaining casual enough to make for an enjoyable read. The trial itself is conveyed in an equally compelling manner, and opens up many legal and ethical questions that should make for excellent conversational fodder amongst fellow pirate and historical buffs.