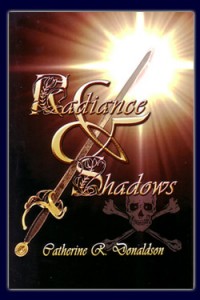 Radiance&Shadows picks up a few years after The Captains Marshall left off. Giselle and Soairse (revealed in this book to be pronounced “seer-sha”) are still dual captains of their own pirate “family”, and seem to have enjoyed continued success since we last left them. The story begins in the Caribbean, but soon works its way north to New York, only recently seized by the British from the Dutch. The details of the plot I’ll forgo, so as to not give away any surprises, but suffice to say Catherine Donaldson has again used her story and her characters as vessels for larger matters rarely found in pirate tales. Where The Captains Marshall addressed maternity and karma, Radiance&Shadows is more a book about unresolved business, quality of character, and love.

Love is key in this case, and let me be clear as to why. This is a book written very much from a female perspective. In the pirate world, this often means it’s a chance for women to “be bad” without shame, to indulge in the lady equivalent of wenching and whatnot. Not so with Radiance&Shadows – this book explores emotional – not physical – love. But this also doesn’t mean love as the sappy, fluffy bunny puppy crush often associated as the opposite extreme of spicy romance novels. No, in this case love is a subject of strength and fear – something people can live without, but not really. It’s also a source of infinite joy, and equally infinite pain. And Donaldson doesn’t pull her punches.

The Captains Marshall had left some unresolved issues – primarily the unlikely (and sometimes potentially supernatural) success of its young heroins. Radiance&Shadows sadly does not address these matters, and also offers up some mysteries of its own – characters gone missing before their stories seem complete, and other characters that seem off-center of normal – not just to the reader, but to other characters as well. These matters are never satisfactorily concluded, but neither is Radiance&Shadows as a whole, for that matter. It ends abruptly, making it quite clearly a middle book. If this is a sign of an incomplete story line, then I worry this series may soon lose steam. But I’m hopeful that it’s all leading somewhere, and if so I expect the results will be both intriguing and unexpected.

Like its predecessor, Radiance&Shadows takes the cliché story of women captains and resculpts it in new and intriguing ways. While most such stories serve as escapist vehicles for freedom and adventure, this book takes a more grounded approach as the Marshall girls and their crew simply try to survive one day to the next. The journey is sometimes evenly paced, other times quite sporadic, and often surprising. As I read her tale, I’m occasionally baffled as to what Donaldson was thinking when she wrote it – but throughout I remained eager to find out.