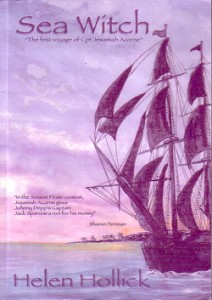 In regards to her pirate novel Sea Witch, author Helen Hollick has only one noteworthy shortcoming – she seems to think she’s in competition with Pirates of the Caribbean. From occasional dialogue remeniscent of Jack Sparrow (was the word “savvy” uttered by a single pirate before Jack?) right down to the cover quote weighing the sexiness of Hollick’s pirate protaganist Jesamiah Acorne against Johnny Depp’s own swashbuckling personification, it’s clear that Ms. Hollick is quite aware of Pirates of the Caribbean’s popularity, and that she hopes her own works might be comparable.

So let me set her mind at ease – no comparison is needed. Regardless of the Pirates of the Caribbean franchise’s past and future successes and shortcomings (I’ve indeed made note of both), Sea Witch is a very worthy undertaking of its own, and needs not take back seat to any flick, no matter how trendy.

Sea Witch is a gently paced pirate adventure that merges fictional characters into the almost-real hey-days of the Spanish Main. Jesamiah Acorne is a pirate, through and through. Not exactly bound by honor, and certainly not by law, he is nontheless likeable and (mostly) admirable. And Tiola, per the book’s title, is a witch – a woman of power, albeit power restricted by rules. Her magic is genuine, but subtle enough to keep this a story just this-side-of-reality enough to be feasible. Their paths cross with each other, as well as with pirates and other – more law-abiding – figures of genuine history.

At its heart a classical pirate epic, Sea Witch follows the heroes throughout the world – from the Caribbean to Virginia, and as far as Cape Town and Madagascar. All the elements of good pirate fiction are here – evil half-brothers, ill-mannered suiters of means, prison breaks, and (of course) brothels. But while the trappings are old territory, they feel more like comfortable, familiar environments rather than the tired cliches they might be in the hands of a less talented writer. Within this traditional pirate world, Hollick manages to create a tale at once a tribute to all great pirate tales, while at the same time being fresh and new. The story covers well-tread turf, yet remains unpredictable and engaging. It contains many of the attributes of a great action novel, but has more heart than most. And while it also has much in common with historical romance novels, it’s far too smart to associate with such rabble. In short, it’s a wonderful read of piracy, complete with all the trimmings of romance and adventure appropriate for this genre we love.

A fine novel, and a wonderful read.