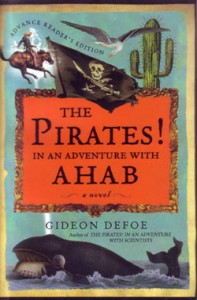 Like its predecessor, Defoe’s second work, “The Pirates! In an Adventure with Ahab” is sure to throw humorless historians into a tissy. But for the rest of us, it’s another wonderfully demented bit of comedic genius. Once again we’re invited to follow the adventures of a hapless crew of no-name pirates (“The Pirate Captain”, “The Pirate with a Scarf”, “The Pirate Who was Good at Math” and such), this time as they seek a way – any way – to gather the needed money to pay off a debt to the most dangerous of villians, Cutlass Liz. They attempt to gain said loot through a range of efforts, from improv-theater to whaling to out-right pirating.

Seldom would I refer to an artistic endeavour as “wacky” and mean it as a compliment, but this would be the exception. “The Pirates! In an Adventure with Ahab” is wacky, off-kilter, irreverant, and highly entertaining. Gideon Defoe keeps his books at bite-sized length (approximately 150 pages) making for a light and easy read. I enjoyed this book, much as I enjoyed his previous, and look forward to many more.