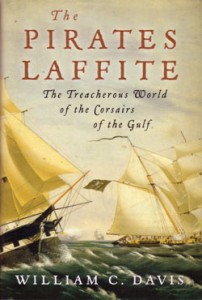 Following Jean and Pierre Laffite from their humble beginnings in France through their booming smuggling operations and eventually to their rise to fame and notariety, Davis carefully documents most every aspect of their lives imaginable. His incredibly thourogh account weighs in at a hefty 490 pages, with nearly another 200 set aside for notes and bibliography, and leaves absolutely no portion of the Laffite’s careers in the dark.

As anyone who’s ever visited either New Orleans or Galveston knows, Jean Laffite is a pirate that’s been more than a little romanticized. Between his legendary wit (when Governor Claiborne offered a $500 reward for Laffite’s capture, Jean returned the favor by posting notices offering $1,000 for the governor’s own capture) and his apparent patriotism fighting alongside American forces against the British in the Battle for New Orleans, Jean Laffite has become an easy pirate to admire. Davis, however, pulls no punches in demonstrating that history tells a different story – namely that of a slave smuggling opportunist. It would seem the true Jean Laffite may have led much more selfishly petty, although still terribly interesting, life.

I found The Pirates Laffite to be an incredibly (and sometimes painfully) educational journey through the lives of Jean Laffite and his brother Pierre (who remains to this day the lesser known of the two, although his exploits seem easily on par with Jean’s own.) Davis’ writing is painstakingly detailed, although somewhat dry, which can make for a challenging read. It’s weighty material, and it takes some endurance to remain alert through it all. But if you’ve always longed to get the full story on Jean and Pierre Laffite, this book has the answers you seek (and then some.) Just make sure to brew a full pot of coffee.