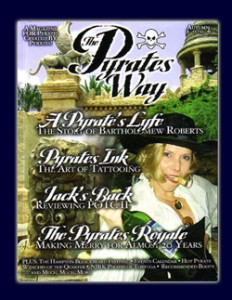 So claims the cover of The Pyrates Way premiere, Autumn 2006 issue. The cover features a pirate wench with a cork in her teeth superimposed over what appears to be Greece (probably somewhere quite different, but it looks like Greece.) The cover text boasts articles on many piratey subjects, from tattoos to Bartholomew Roberts. Overall the cover is a bit congested, but hopefully you’re not buying it for the cover. Let’s talk innards, mates…

I think it best to examine The Pyrates Way from two perspectives – content and presentation. Starting with content, this issue has several feature articles. First is an interview with Brad Howard of the band Pyrates Royale. I’m not very familiar with this particular group, and found the article quite interesting. The interviewer did make some odd comments (suggesting that a band “rehashes” the same material seems a harsh choice of words), and the writing is at times a little raw and awkward, but by and large I found it an interesting and enjoyable read. I can easily say the same of the next two features, “Tattoos & Pyracy” and “Bartholemew Roberts.” I was somewhat less impressed with the next article on the Hampton Blackbeard Festival, as it was fairly general, citing very few specifics. The brief text was heavily padded with large photos, although they did little to convey the actual atmosphere and activities of the festival.

The Pirates of the Caribbean 2 article suffered two drastic misfortunes – the first being that I (like most of us) have already seen the movie several times. What’s more (perhaps not like most of us) I’m just not so enamored with the PotC franchise since being rather let down by the sequel. It would be a rare article on the subject that would hold my attention for long. This, unfortunately, was merely a rundown of the plot and biographies of the major stars and production crew. Most of us already know this information, and the article didn’t contribute much of note.

Next up is an article on the New Jersey Renaissance Kingdom, and its recent pirate-themed season. A three-page article that is little more than four or five paragraphs of actual text, it bears similarity to the earlier article on the Blackbeard Festival. However, the photos seem a bit more well chosen, and the write-up – though terribly brief – does carry a few more specifics, and serves to make this festival seem the more appealing of the two (which may or may not be an accurate reflection of reality.)

The final of this issue’s feature articles is actually two articles combined, both submitted by Appleton Rum (and apparently reprinted from publicity materials – not exclusively created for The Pirates Way.) The first article addresses rum’s history, and the second how rum is made. Both are interesting and informative – although probably a bit more so if the material is new to you. Both also toss more than a few nods to Appleton Rum, but this should come as no surprise.

Aside from the feature articles, this premiere issue also features numerous “columns,” although I think the word might be misused in this case, as most contain very little writing. Included was a text and photo-spread titled “The Pyrates Way Visited…”, which is comprised of shots and info on The Baltimore Pyrate Invasion, Pirates of the Virginia Renaissance Faire, the Wench Privateers Feast, and Walsh’s Tiki Pirate Party. This section is akin to the “cool folks in the city” sort of features that appear in many local entertainment publications. Additionally featured amongst the columns were DVD, Book, and CD reviews – each consiting of a paragraph, photo, and 1-5 parrots to indicate ratings.

Also of note is the “Treasured Locations” section, this issue featuring Blackbeard’s Castle on St. Thomas. This particular article was quite interesting, although it bears mention that, like the rum feature article, it was contributed by a third party company, and apparently not uniquely written for Pyrates Way. This article also included a photo of Blackbeard’s Castle, complete with bronze statue of the man himself, that would have been absolutely gorgeous had the statue not fallen so terribly into shadow.

Several additional columns come into play, including pirate jokes and comic strips (not the most original, I’m afraid), a crossword puzzle, and a classifieds section (rather barren, but not surprising for a first issue.) And then, smack in the middle of the magazine is The Pyrates Way’s take on the centerfold – a four page salvo of “Wenches of Autumn 2006.” The introductory page features several small shots of pirate lasses (or just their cleavage), along with text explaining to the ladies how they can participate in the future to win fabulous prizes. Then it’s on to the three featured wenches. While I appreciate the desire to promote “real” women, the first two shots just aren’t visually interesting enough to command a full-page picture each. The third photo bears a far superior pose and background, but is also one of the least flattering pictures I’ve seen in a long time (although the Pirates of the Caribbean ad positioned next to it makes for a priceless combination.)

From a content perspective, The Pyrates Way is actually somewhat decent. I found many of the articles entertaining and interesting, while others I could do without. But I could say the same about any other magazine I enjoy. However, I do need to address the presentation of this magazine – In short, it leaves much to be desired. The font utilized is huge, and typos great and small plague throughout. Many of the articles are on the short side, with extensive visuals inserted to carry the load – but this is made difficult as much of the layout is awkward, and many of the selected photos are either over-shadowed, poorly posed, or visually convoluted. I don’t expect every page to be a masterpiece, but some of them are an all-out assault on the eyes.

But all that said, I freely admit I have a one-year subscription to this magazine, and I’m glad I do. Presentation is important, but substance more so – and there is some substance here. The premiere issue of The Pyrates Way – for all its shortcomings – managed to both entertain and inform me. And while I suspect they have a rocky road ahead, I’ll look forward to seeing what’s in store next as they grow into themselves and hopefully find their footing.