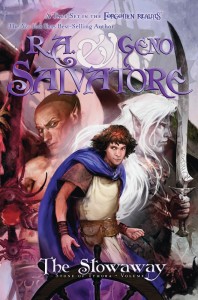 In my time, I’d say I’ve read my fair share of pirate novels in a variety of genres. Historical fiction and non-fiction, of course – but also comedy, self-help, sci-fi… even mystery and instructional. But I didn’t much fathom the notion of reading a pirate book that was true, unadulterated fantasy. As in Dungeons&Dragons, Forgotten Realms type fantasy. Dark elves and trolls, demons and clerics – and yet that’s exactly what The Stowaway by R.A. Salvatore is.

The tale begins with a boy, Maimun, who’s being interrogated by pirates, and then continues with a series of flashbacks – recent and distant – that recount the tale of his life. And occasionally we return to the present for a brief glimpse at his pirate captor, who is indeed the sort of salty swab one would expect from a pirate novel of any genre.

While these pirate encounters with Maimun’s captors are regrettably brief (although there does appear promise that they’ll be more plentiful in the sequel, due out next year), they are fortunately not the only run-ins with pirates we’re to experience. Maimun’s life story doesn’t begin at sea, however, and so first we witness his remarkable rescue as an infant from the remains of devastation, then through his childhood, and finally to his adolescence “on the run” with his protector and mentor, Perrault. While those so piratically and obsessed as to be bored with all things ashore will find little of value in these stages of Maimun’s story, the rest of us may find them plenty interesting (I certainly did.) Maimun’s life is told in a straight-forward manner, colorfully painted by Salvatore. And yet mystery surrounds him just the same, as he’s pursued throughout his life by a demon for reasons that are slowly, if not conclusively, revealed throughout.

It’s during an escape from this demon that Maimun finds himself at sea – first as a passenger with Perrault, and then later alone as a stowaway. And it’s during each of these voyages that we happily (although perhaps not so much for Maimun) meet up with pirates. However, these pirates are more of an aside to a larger tale – an aside that may or may not come into greater play in the sequel. Perhaps more significantly is Maimun’s meeting up with Drizzt, the good-natured dark elf who stars in so many of Salvatore’s other works.

Those looking for straight-up pirate reading won’t likely be satisfied by The Stowaway. But those who enjoy a more diverse spread of literature – but who also enjoy a little piracy added for zest – may find this an easy, enjoyable read. This would hold especially true for old Sci-Fi/Fantasy buffs who remember Drizzt from their earlier years. But even those of us who barely know a dark elf from a subterranean Spaniard should have no difficulty in enjoying the ride.

2 thoughts on “Review: The Stowaway”