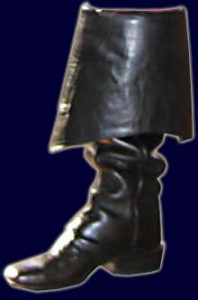 Ordering footwear online is always a scary experience, especially from a company that has no real return policy. Nonetheless I decided to take the plunge and order a pair of Champion Attitude’s Custom Big Bell Swashbuckler Boots – they looked to be some of classiest pirate boots available, and I figured a company that’s spent generations making cowboy boots probably knows what they’re doing.

Let me start off by reviewing the boots themselves – they really are top notch. The leather seems high quality and the craftsmanship is superb. The sizing was based on foot tracings I’d sent in, resulting in an almost-perfect fit (they were a little loose in the heel, but this was easily remedied with some inserts.) The break-in period was surprisingly short, especially considering the all-leather sole. All in all, these are a far cry from costume boots – these are durable and battle-ready. I could wear these every day if it were socially acceptable.

I’m extremely happy with my boots, and I really wish I could give Champion Attitude my full endorsement, but I do have to express a few words of caution. When my boots first arrived, they were wrong. Not hugely wrong, but wrong in smaller ways, such at the toe being different than I’d ordered, as well as the heel. These may seem like quibbles but they dramatically changed the overall look of the boots. This was particularly true of the heel – its extreme height and angle created a curvy effect that threw off any pretense of rugged manliness, leaving instead a thigh-high look more appropriate to a table-dancer. When I returned the boots to have these errors repaired the customer service representative at Champion Attitude insisted that what I’d received in fact WAS what I’d ordered. This was frustrating, as their web site shows closeups of their toe and heel options, which I felt clearly differed from those which I’d received. And while the representative seemed genuinely willing to help, he also seemed unclear just what I was complaining about. In the end he offered to have the heel replaced free of charge (although I was asked to pay the shipping.) No such offer was made regarding the toe, as it would have required a much deeper boot reconstruction.

When my repaired boots arrived, the lower, straighter heel made a world of difference, and after a bit of time to soften them up and beat them down, I finally had boots that very closely resembled those I’d originally envisioned. They’re boots that I’m truly proud to wear, strikingly handsome and very piratey. If I were in need of a second pair of pirate boots I would consider ordering from Champion Attitude again, but only after an extensive phone conversation to ensure I was getting exactly what I wanted.

UPDATE: I was checking out the CABoots website recently and I noticed several changes, not the least of which is a more detailed ordering process. Sizing, toe and heel selections, boot hight – all of these are spelled out much more plainly, as is their return policy. As stated before, I appreciate the unique challenges a “made to order” business faces online, and I applaud Champion Attitude’s efforts to better serve their customers. Despite my original difficulties with my own CA Boots, they serve me well, and I’ve yet to see their equal.