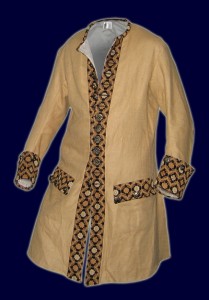 Jack Sparrow did much to open up the world of pirate merchandise. Prior to Jack, finding online retailers of quality pirate clothing was tricky at best. Since Jack, a little online research reveals dozens, if not hundreds, of sources for pirate clothing. But Jack was a double-edged sword – his commandeering of many pirate “staple” items (bucket boots, tricorn hat, dropfront breeches) has led many people to associate these items with pieces of a Jack costume, no matter what the color or who’s wearing them.

This truth is perhaps most starkly apparent with the common frock coat. Be it blue, grey, brown, or black, it seems that most any knee-length coat with cuffs carries a bit of a Jack Sparrow flavor about it. But what are we to do if our goal is to NOT look like Jack? Perfect Pirate may have the answer…

From earlier reviews, we already know that Perfect Pirate makes a fine Jack Sparrow frock coat. But with some newer patterns, they also demonstrate a talent for decidedly non-Jack clothing as well.

With their newest line of original frock coats, the most striking departure from the Jack look is the colors and patterns of the fabric. My own frock is made from a heavy, course-weave mustard gold, with trim in a black and gold tapestry. No one could ever mistake this look for a Jack Sparrow style, and the same can easily be said of the other pattern available at the time of this writing, which is a red brocade with gold trim. Either jacket lends the impression of a pirate more financially well off than the beloved Jack Sparrow – not quite a pirate king, perhaps, but at least pirate nobility.

But coloring aside, these coats also boast a pattern that is entirely different from a Jack Sparrow coat. This sort of detailing may not be appreciated by the average member of the public, but for true students of pirate clothing this sort of characteristic is pure gold. In essence, these coats are much simpler in cut than is Jack’s – gone is the pleating at the waist in favor of a much more basic, yet equally striking, split tail. Also the cuffs are much smaller, which is much more functional than are the oversized cuffs so often seen (and so often seen knocking drinks off the table, for that matter.) Speaking of functional, the pockets are exactly that, as are the primary buttons of the coat itself (pocket and cuff buttons are not functional, but chest buttons are.)

The only concern I would offer for this jacket would be the width of the sleeves – they’re a bit on the thin side, so if your arms lean towards the muscular or chubby, it might make for a snug fit. Even with scrawny arms such as my own I found the sleeves of my shirt uncomfortably grabbed at the inner lining of the coat, but this was easily remedied by unbuttoning my shirt sleeves and allowing them to harmlessly ride up my arms as I put on the coat – problem solved and perfectly comfortable.

I adore my Gold Pirate Coat, and it has become a staple of my “official” Bilgemunky garb. For anyone looking to seperate themselves from the Sparrow look-a-like flock, such a jacket is a definite godsend.