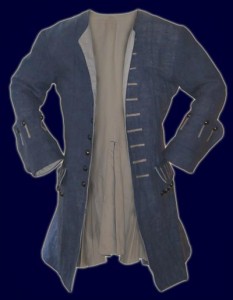 The internet is swarming with folks seeking to emulate their favorite Pirates of the Caribbean character – almost daily, droves of Jack Sparrow look-alikes swarm our good ranks. Think of that what you will, but the sad fact is that bloody few of these Sparrow clones look much like him at all. Some of this is due to the simple truth that so few of us look anything like Johnny Depp, but more of it is due to the difficulties of capturing “the look.” For wearing a fairly basic pirate ensemble, it would seem that Captain Jack is actually quite difficult to recreate from a needle-and-thread perspective.

Perfect Pirate is one of the few businesses to get it right, and may well be the pinnacle of their craft. I’ve reviewed their shirt and vest previously, and found them to be exceptional in every respect. But now it’s time to check out the big dog itself – Perfect Pirate’s recreation of Jack Sparrow’s frock coat.

The first thing I noticed about this coat was that it’s heavy. This is important to note, because many frocks – often made of basic modern fabrics (or even when proper cotton, relatively thin, tightly woven strands) – are quite lightweight. This might seem like an advantage with these other coats, but wait until you see how modern fabric wears – how it lies and how it wrinkles. Normal modern fabric just doesn’t do the trick. Perfect Pirate’s frock is made with a heavy, extraordinarily coarse weave fabric, the likes of which you generally only see in maritime museums. It’s durable and rough looking, and painstakingly hand-dyed for that true piratey look. The lining is also a thick heavy cotton, although of a tighter weave than the outer portions. Internally and externally, this is a coat made from the perfect materials for the genre.

The cut of this coat is also noteworthy, as the back has the most extreme pleating I’ve ever seen. It hangs close to the body, but spreads out to reveal countless buttons and folds. This makes for several small details that are generally hidden, and that will only be noticed in glimpses as you walk around – but it’s details like this that command notice, as they show this isn’t a costume but a true historical recreation as suited to daily wear and tear was was the original.

This coat features two fully functional pockets on either side. However, the buttons on the pocket flaps, along with all other buttons, are not themselves functional. But these coats were meant to be worn open, so this isn’t really much of a concern. Actually, this coat’s only real concern is the price. At just under $600 – whether you’re completing your Jack Sparrow outfit or creating a new look of your own – this is a serious investment. But that said, I’ve seen many different frock coats on many people, both store-bought and home made, and even the most casual glance reveals the striking superiority of this coat. From the choice in materials to the design and the handcraftmanship, this is absolutely NOT a budget coat – not in cost, and certainly not in quality.

Wearing this coat is a joy. It does take some finessing to get on, as the thick cotton lining doesn’t slip on and off as readily as the rayon and such found in most modern (and indeed, many pirate costume) coats. But once on it moves easily, and the heaviness I so readily noticed when holding it virtually evaporates as it rests on my shoulders.

At the time of this review, Perfect Pirate is only offering this coat in Sparrow-style grayish blue. It’s a pretty universal choice for Sparrow wannabes and other pirates alike, although hopefully they’ll be able to offer more colors soon. But meantime, this remains an extraordinary frock coat – it looks, feels, and IS a genuine, real as they come pirate coat. Wear it for a week or two without bathing, spill a little rum on the sleeve and sleep with the pigs – after that, I challenge anyone to distinguish it from its 18th century counterpart without resorting to carbon dating.