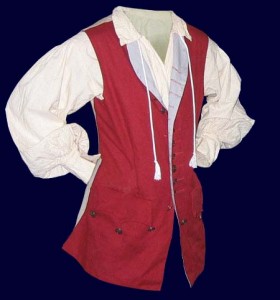 The internet is full of Jack Sparrow costumes, many of which do a fine job at capturing the basic shape and colors of his outfit. But quite often one thing is missing (besides Johnny Depp, that is.) One of the genius elements of the Jack Sparrow look is its bedraggled simplicity. The clothes looked period and well-worn. On the surface this is an obvious thing to do when designing a pirate captain, but it’s amazing how often it’s overlooked. And obvious though it may be, it’s also surprisingly hard to recreate. To make an outfit appear “period” while remaining visually interesting requires more than drab colors and old patterns – even little details such as hand-sewing, or utilizing course-woven fabric, can make a world of difference.

Upon first inspecting a sampling of Silhouettes Clothing’s products, it was clear they’ve an appreciation for such details, and that they’ve spared no effort in recreating that Jack Sparrow magic.

Silhouettes’ first item I tried was their shirt. Cut from a yellowed muslin (I believe it was stained with tea,) it’s instantly ready for that new but “well used” look that many a pirate should seek to capture. As with its inspiration, it’s dashing but not overly froofy. Soft, breathable, and comfortable, this shirt is very well made. The shoulders and arms are double stitched for strength, although the seams down the front are only single stitched (I imagine this is to keep the seam discreet.) This shirt’s crowning detail, however, would be the cuff buttons on each sleeve. Some manufacturers would ruin an otherwise perfect effort with plastic, while other, more concientious sorts would opt for wood or metal. But Silhouettes goes two steps better with a couple of glorious little buttons carved from abalonie shell. True, most folks you meet will never notice these buttons, but it’s details like this, frankly, that make you feel like a pirate through and through.

The next item I inspected was Silhouettes’ vest. Although mine is red, it’s also available in blues and blacks and is very much modeled on the same pattern as Jack Sparrow’s, with back laces, functional side pockets, and seemingly countless copper buttons. As was the style of the day the back and front are made with different fabrics (front is red, back is grey), both being very old in appearance thanks to their coarse weave. As with the Top Notch shirt, it seems quite old and authentic – folks would easily mistake you for an actual pirate if it weren’t for your fresh clean scent that comes with bathing more than once a year.

Silhouettes Clothing’s web domain name, www.topnotchcostumes.com, is well chosen. If you’re in the market for a Jack Sparrow outfit I seriously doubt you could do better. Top Notch can provide the clothes, swing by Captain Jack’s for your hat, and then start growing those dreadlocks – your lady friends won’t know what hit them (and any other guys that tried to buy the Jack Sparrow look from a Halloween store will shrivel up in shame.) My only hope would be to see Top Notch expand their line of clothing. Now that they’ve perfected the Jack Sparrow look, there’s a whole world of Blackbeards, Jack Rackhams, and Long John Silvers in need of their assistance.