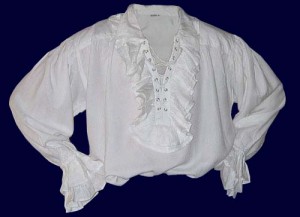 A pirate’s success in life depends on many factors, luck and skill amongst the very top. But perhaps even more important are the tools of the trade – a captain would never seek treasure without a map, nor would the bos’n splice the mainbrace without a marlinspike and keg of rum. And in a similar vein, no dashing swashbuckler should even think of crashing the governor’s ball without his ruffles.

Whether swinging from the chandelier or merely shouting, “Ha!” as you set the captain of the guard off balance with the tip of your rapier (and thus making him swing his arms in a wildly comical fashion before falling headfirst into the punchbowl) – DressLikeAPirate.com’s Swashbuckler Shirt is everthing a rogue could ask. Multiple layers of ruffles will surely catch the eye of all in attendance, and the super-soft, 100% viscose material won’t chafe the princess as you toss her onto your shoulder while making a dramatic exit (try and say something clever while doing this.) The fit is excellent and the craftsmanship seems quite good – my only complaint was that the sleeves were a bit too short for comfort – they fit fine while my arms hung at my sides, but creeped up awkwardly when swinging a rapier. However, DressLikeAPirate has stopped selling their Small shirt (which is what I have) in favor of a Small/Medium, which they tell me has longer sleeves.

If you’re the daring sort that’s not afraid to show your sensitive side whilst you parry and reposte, Dress Like a Pirate’s Swashbuckler is a great choice at a reasonable price. Its viscose rayon fabric and elastic wrists won’t satisfy the hardcore reenactor, but for those of us who put fashion before historical accuracy, it’s surely worth its weight in gold.