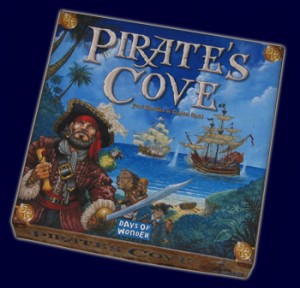 Pirate boardgames, much like pirate children’s books, have the distinct advantage of freedom. They’re free to ignore the limits and dictates of history, and are at their best when they shamelessly embrace the colorful fun and mythology of the pirate life.

Pirate’s Cove does a splendid job of doing exactly that. Players each adopt a pirate ship, and then take it in turns to sail across a colorful map, plundering towns and each other along the way. The entire game takes place in twelve “months”, with each month being a full round of turns. Players secretly elect where they intend to sail by using a ship’s wheel dial, and then all display their dials at once – any player going to an island alone gets free reign to conduct their business there, while if two or more make the same landfall, combat naturally ensues.

Ship combat, as with most board game procedures, is tricky at first, but rapidly becomes second nature. Ship strength is determined by how much you’ve souped up your strengh (crew, cannons, hull, and rigging), which can be done at various ports. Whether or not you have a parrot or a specialist onboard can also affect your odds. Competing pirates take it in turn to blast away at each other, or attempting to flee, until one remains victorious, free to enjoy the spoils and the island in peace for the remainder of the round, while the losers retreat to Pirate’s Cove Island for repairs.

Even if players manage to avoid fighting one another (and what fun is that?), they still run the risk of meeting with one of the non-player super pirates, including such historical and literary figures as Blackbeard, Anne Bonney and Mary Read, and the Flying Dutchman. One blank stat card is included as well, so players can create their own non-player super pirate.

Throughout the adventures pirates collect gold and cargo, which can be spent for ship repairs, upgrades, and tavern cards (sort of like Chance cards in Monopoly.) But clever pirates don’t get too spendy, as ultimately the goal is to end the game with the most fame points, which can be purchased by “burying” your loot on Treasure Island. In the end all the ship upgrades are forgotten; but fame – that lasts forever, lad!

That’s the game in brief, and it really is a joy to play. The artwork on the cards and board is both piratey and fun, and everything is well made of sturdy materials (wood and heavy duty cardboard.) The twelve-round time limit keeps the game long enough to really emmerse yourself, without the tedium of a game that seems to drone on forever.

Very fun, and well worth the $50 – a game the whole family can enjoy in true piratey fashion!