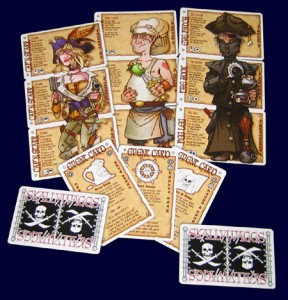 Skallywaggs is a top-notch mix-n-match card game where you struggle to build a crew so you can set sail while doing your devil-best to keep your opponents from doing the same. Crew members are assembled from a multitude of three-card combinations (head, torso, legs) to make a near endless variety of cut-throats. But mind you, not all pirates are created equal, and some combinations can create characters that will win you a distinct advantage, while still others might bring your crew to a screaching halt.

Aside from character cards, the deck is also full of event cards. These are used to play on yourself or on others, depending on the nature of the card and your personal inclination. And this is when the fun starts as you utilize event cards to build up your own crew while decimating your opponents’. Since the crew-members are so unique it’s easy to develop some attachment to them during the game, which made it all the more satisfying when I used a series of Man Overboard and Press Gang cards to rip my son’s crew in half (he responded in kind, though, by inflicting me with a severe case of Scurvy&Pox.)

Skallywaggs is unique in the world of pirate-themed table-top games. The concept is highly original, gameplay is challenging and well-paced, and the whole thing is brimming with personality. Gathering up crewmembers you can actually identify by name lends itself well to an emotional investment – in most games your opponent might steal a few doubloons, but only in Skallywaggs can they make off with your buxom waitress, Sweet Cider Tripp, or abscond with your mighty Cap’n Wargun – these are losses that cut to the quick, enflame passions, and make for a lively evening of table-top skullduggery.