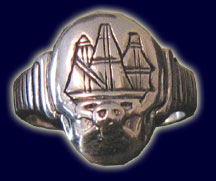 As stated in my pendant review, Pirate Jewelry offers one of the largest selections of sterling pirate accessories around. Their styles range to suit a wide variety of interests (as long as it’s piratey.) As such I’ve selected three very different pieces in hopes of capturing a sense of the options available (but believe me, there are many more!)

The first ring is an understated sort featuring a ship deeply etched above an embossed image of the jolly roger. The etched lines of the ship are darkened so as to make the image extremely visible, although the skull and crossbones is a little faint. The band leans towards the thin side, but as with all the Pirate Jewelry pieces I’ve reviewed it remains very sturdy. Personally I think this ring is lacking a little something. Perhaps it’s the way the Jolly Roger seems only partly there, or maybe it’s how the background of the ring seems a bit bulbously shapen – it’s almost as if they’d intended to make the background into the shape of a skull, but then ran out of time. It’s a decent piece, but I think it could have been better. 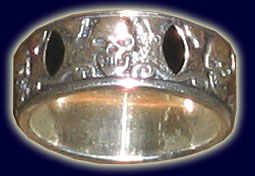 The next piece is a solid, heavy band featuring recurring skulls all around, interspersed with slight scrollwork and blackened enamel “diamonds.” This ring is very sharp and very sinister. While it would perfectly compliment many a pirate costume, this ring shouldn’t be ignored by anyone who loves skulls (goths, metalheads, paleontologists, etc.)

The last ring I reviewed featured a highly stylized pirate flag draped over a wickedly bent cutlass. The flag itself features blackened etchings of swords, crossbones, and a skull. This is a terribly interesting piece – the sculpted cutlass is curved to such an extent as to indicate that the artist was inspired by real-world items, but not restricted by reality. The end result is very fun, very piratey, and definitely striking. 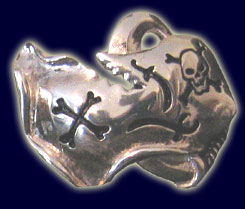 As stated before, Pirate Jewelry offers a wide selection. I’ve now had the opportunity to review several of them, and all have been extremely well made. My only complaint about the rings was the sizing – I’d ordered two rings intended for my ring finger, and one larger for my middle. But upon arrival only one of the rings actually fit as expected – one of the ring finger rings and (surprisingly) the middle finger ring were both too small to comfortably fit my ring finger. I wouldn’t worry, though. Ring sizing always struck me as being a little bit finicky, and if you encounter a similar problem I’m certain Pirate Jewelry would gladly accomodate an exchange.