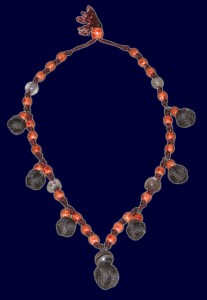 It stands to reason that any pirate worth his or her salt will probably wear at least a little bit of jewelry from time to time. Generally this would mean either wearing some gold and silver pretties that were stolen from a Spaniard, or perhaps some skull&crossbone ornamentation for those who like to flaunt their proclivity for plundering. But what about the third option? That which is born of sailors spending their time on beaches in the Caribbean? Jewelry derived from the local beads of wood and glass combined with a swab’s natural talent for knot work? This is the question, and PiRATE PRiMiTiVE would appear the answer.

Being a side-project of long time pirate music veterans Mallory and McCall of the Skeleton Crew Pirate Band, PiRATE PRiMiTiVE focuses heavily on the sort of jewelry that pirates either could have made for themselves, or might have bought/lifted from the local populace. The Monkey’s Fist, being a definitively nautical knot, features heavily into the bulk of their work. Combined with wood and glass beads all strung upon tarred cord, the end effect is perfectly suitable to a Caribbean pirate of most any rank and also quite distinctive from most anything else out there.

For the purpose of this review, I selected the 24 Karat Fists piece, being “the first of  the PiRATE PRiMiTiVE crown jewels” (and who better than to take possession of the crown jewels than the Bilgemunky, I ask?) While PiRATE PRiMiTiVE’s work is available in a variety of colors, I chose this piece largely for its earth tones, which I felt would work well with many of my favorite pirate clothes. I also liked the apparent length and the way it layed, as the available pieces range widely in these respects as well.

The jewelry I received was indeed identical to the one pictured, and I was pleased to note that it was soon marked as “sold” on their website. I was never quite certain if the piece I was ordering was indeed one of a kind, so I was delighted to see that it was (I mean, really, I can’t rightly share the crown jewels, now can I?) 24 Karat features 7 knots – I like to think of it as one for each of the seas I’ve sailed (although in truth I’ve only sailed 4 of the 7 seas of the ancient world. 5 depending on how you count.) It boasts many, many wooden beads and a select few pieces of clear sea glass. The overall effect is rustic yet fancy. It’s not as heavy or as bulky as I feared it might be, and so long as you don’t hope to tuck this necklace beneath your shirt it’s a perfectly comfortable wear.

The topmost bead is intended to slide, thus allowing some adjustment to the necklace length. However, the adjustment only really allows for 2 inches of variance in the circumference, and slides too freely to hold anyways. As such the necklace is always defaulted at its maximum length – hardly a problem in my case as that makes for the perfect length. And if I did need to shorten it, a little craftiness could do much to alter the piece to my liking.

PiRATE PRiMiTiVE might not be suited to compliment any and all pirate outfits. But with their wide selection of sizes, colors, and styles it’s easy to believe they could find homes around the necks of many, many fashionable scalliwags. And with so many unique pieces, it would seem a fine opportunity to own a piece of of one-of-a-king pirate splendour.