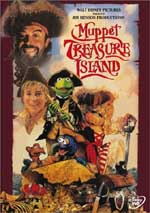 The Jim Henson Company is responsible for some of the greatest little gems in movie-making history, and Muppet Treasure Island fits well amongst those ranks. Being a slightly modified version of the literary work, we follow the adventures of Jim Hawkin and his pals as they seek treasure across the sea. Along the way, they run afoul of evil yet endearing pirates – most notable being Long John Silver, portrayed extraordinarily by Tim Curry. Jim and Long John are the only major characters played by real people, the rest being muppets. Included are many favorites (Kermit, Miss Piggy, Animal, the Swedish Chef, Gonzo, etc) and one or two new ones (Polly the Lobster, most notably.)

Fans of Muppets will enjoy this film because, well, muppets. Fans of Treasure Island and other pirate adventures will certainly enjoy the plot, scenery, and various gags and jokes – even watching the plot contort to better accomodate the puppet cast can be highly enjoyable (the writers weren’t oblivous to this fact, either – comments are made by characters time and again referencing the unlikliness of some of the situations.) Also worth mentioning is the soundtrack. The film was scored by Hans Zimmer (composer of two of the three Pirates of the Caribbean Flicks), and includes many singing numbers. Many have become classics amongst pirate fans, including “Professinal Pirate” and “Shiver My Timbers.”