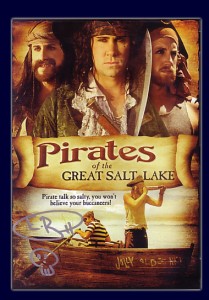 Being an independent film, Salt Lake understandably lacks the Hollywood polish. For the most part this isn’t a problem as it remains plenty slick on its own merits. It does have two moments of weakness, though – both of which regrettably occur within the first few minutes, and risk audiences prematurely dismissing the movie before it truly begins. The first incident is during a flashback from generations past in which a demonic pirate is seen – it’s relatively silly and reminiscent of a B slasher film. Not that B slasher films are all bad, but this movie is smarter than that. The second incident is when the protagonists, Kirk and Flint, find their first victims – a catamaran with two ladies and some muscle-bound dude. In a film full of great acting, these three extras are amongst the worst imaginable, and look entirely lost for what to do, save for when they look like they’re trying not to laugh. It’s sad because these two events lower the bar of the film, and some viewers may have difficulty recovering in time to get full enjoyment from all that follows.

For those that do recover, however, this film quickly begins to show its merits. Taking place in modern Salt Lake City, Kirk and Flint are pirates – two guys who just know that piracy is in their blood, and seek to live out the swashbuckling lives that fate has chosen for them. The challenges they face are many, including parents who don’t understand their chosen lifestyle, “victims” who are more entertained than scared, and a predominant lack of ship, crew, or prospects of any sort. All this changes, however, upon the discovery of a treasure map, and so the search for riches begins.

Along the way the viewer is treated to more than a few oddities – the sorts of surreal elements that can be perplexing if you think about them too hard. Ancient gypsies with laptop computers, an apparently angelic Indian narrator with a penchant for metaphor, and the wordless exchange of an eyepatch between kindred souls. Strange? Absolutely. But also a sort of quiet genius. The humor throughout is wry, dry, and poignant. Those of us immersed in a pirate lifestyle of our own will surely find much that’s humorously relatable, while our loved ones who’ve politely tolerated our odd obsession might cringe at how effectively Pirates of the Great Salt lake satirizes our situation.

Truly, this is first and foremost a movie written for the pirate enthusiast. But in this there is something that bothers me:  I enjoyed this movie, but not quite as much as I wish. Strangely, much of the humor seems funny in hindsight, but was merely amusing while actually watching it – something about surreal and outright goofy gags performed in such a matter-of-fact, dry manner proved difficult for me to process. I got the jokes, I smiled at the jokes, but I rarely laughed at them (although there were exceptions.) However, this same dry delivery, while perhaps impeding the humor a bit, also serves to add substance to scenes that might otherwise have simply been screwball. The narrator’s inspired monologue about persistence when digging for treasure, the imagery of two modern pirates riding a tandem bicycle to the song “Life Less Ordinary”, Kirk’s discussion with Flint about his wearing of an earring as though it were a performance review – these and countless other oddly touching moments stick with me long after the movie has ended, and it’s these scenes that make this movie iconic of our barely existing subculture.

It may be imperfect, but Pirates of the Great Salt Lake wears its pirate heart on its sleeve, and is a definite must-see for any and all fans of the pirate genre.

5 thoughts on “Review: Pirates of the Great Salt Lake”