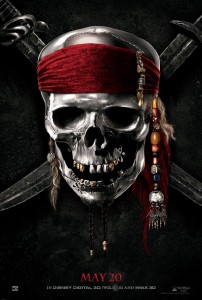 Now, that last statement is bound to ruffle some, and I’m not saying On Stranger Tides was a bad movie exactly. It was just dull. Predictable, dull, and more of a cartoon than a live action adventure. It was only truely bad when considering the talent onhand, and comparing it to what this movie *could* have been.

Jack Sparrow has regressed over the years. Originally a quirky anti-hero with more than his fair share of luck, now he’s a superhuman who can virtually bend reality to suit his needs. Magically appearing and disappearing from beneath tables, bending palm trees in half (to use as a human slingshot no less), laying traps with chandeliers and hankys that would require preternatural foresight… there is indeed seemingly nothing he can’t do. In this latest adventure he’s again competing with his old nemesis Barbossa, who’s given up piracy to be a more genteel privateer – complete with a makeup beauty mark and wig. This might have been played up to greater comedic effect had Geoffrey Rush been given some leeway to ham it up (and maybe shave off that gangly beard), but instead it remains one of this films many underdeveloped commodities. The only other repeat cast are Gibbs, who remains doting Gibbs, and Keith Richards reprising his roll as Captain Teague for a brief, relatively pointless cameo.

New onstage are most notably Angelica and Blackbeard (and the Spaniards, of course, who offered great promise but were in the end little more than sinister stage props.) I was pretty much resigned that Angelica would be a lame addition ever since seeing the first still shots, and this proved sadly predictive. Angelica is a non-character (second only to the entirely uninspired preacher who fell in love with the mermaid.) We’re told time and again that she’s Jack Sparrow’s equal – that she’s wily, cunning, and dangerous. But as an audience we see none of this – we’re given only a doting fangirl with a junior-high crush on Jack. The chemistry between the two is nonexistent, and Penelope Cruz exudes about as much pirateyness as would a latin Elmo.

Conversely, I had hoped that Ian McShane as Blackbeard would be this film’s saving grace, and according to many pirate fans he was. But I just can’t get onboard with this either – his outfit was wearing him, and McShane’s lack of passion only offered a faint echo of Al Swearengen on an off day. Sure enough, Blackbeard said and did some very bad things, but there wasn’t the slightest hint of a devil fuming behind those eyes, thus reducing the most frightening pirate in history to the most forgettable villain of this franchise (oh yeah, the Spaniards.)

I could go on, and indeed, this is my third effort at writing this review. I have to keep starting over as I repeatedly drift toward anger – not that it’s such a lame movie, but that it should have been so much better. But the bigger crime is that it’s just plain lazy, asking the audience to love it simply for being part of a familiar franchise rather than making a real effort to give us reason love it anew. Inspired by the book On Stranger Tides, they had some killer – woefully underused (and worse, misused) – source material. While I hardly expected a loyal adaptation I’d certainly hoped for something better than this clunky mess of misplaced zombies, an inexplicably magical Blackbeard, clear pandering for 3D impact, a predictable finale, and Jack concluding the film by wiggling his fingers nonsensically and saying “booga booga.” I’d suggest that Pirates of the Caribbean may have finally jumped the shark, but any film that features webslinging vampire mermaids doesn’t really have to.

15 thoughts on “Review: Pirates of the Caribbean – On Stranger Tides”