Historical documentaries walk several fine lines. They need to stay true to history, but they should also get us an “up close and personal” exerience – a tricky combination when much of what we know is incomplete and splotchy. They also have to weigh the tricky balance of being approachable to the novice, while also offering some worthwhile content to the seasoned student (indeed, sometimes I feel that if I hear one more explanation about the difference between pirates and privateers, I might scream. But I also recognize that most viewers haven’t heard this explanation thousands of times before.)

The History Channel’s True Caribbean Pirates does a fine job of providing a broad snapshot of the pirate life as it follows the careers of usual suspects Henry Morgan, Blackbeard, and Calico Jack with Anne Bonney and Mary Read. But they also cover Henry Jennings and Bart Roberts – two pirates that don’t get quite as much mainstream attention as the others. If you’ve been looking to brush up on your basic pirate history, or even if you’re delving into this material for the very first time, this is an entertaining and informative way to start. The acting is decent, as are the costumes (albeit a little too clean at times.) The battle scenes aren’t exactly the stuff of Hollywood, though, and many times canonblasts and the resulting splinters are clearly superimposed. But this is easily forgiven in light of the fact True Caribbean Pirates manages to bring the viewers much closer to these noteworthy pirates than most documentaries would dare. This is not one of those “arm’s distance” documentaries in which we view the subject characters from afar (generally in slow motion with lots of repeat footage – often blured) – no, in this film we jump right into the taverns and aboard ships. We get to watch upclose to Henry Morgan’s key career points, complete with Welsh accent and funny hat. But we’re also given the bigger picture… 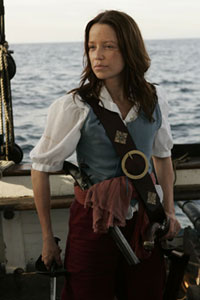 It seems to me that many folks unfamiliar with pirate history assume that pirates were something that just happened, and then assume they just stopped happening as well. They don’t appreciate the series of events that led displaced hunters to buccaneering, buccaneers to outright piracy, and pirates to the gallows. It’s in this aspect that True Caribbean Pirates truly shines – it emmerses us not only in the pirates themselves, but the politcal environments through which they struggled. It explains how Henry Morgan used his pillaging nature to bolster his social standing, and why later pirates were shunned and exiled for similar actions. It also makes effective use of animated caribbean and world maps to give viewers a sense of geography that might otherwise be missing. The history of piracy in the caribbean is a lot of data to digest, but careful viewers will quickly find themselves developing a solid beginner’s foundation in the subject, complete with not only the whats of piracy, but the hows and whys as well.

Seasoned pirate afficianados will likely be well-versed in the material at hand, but will likely enjoy hearing new perspectives from various experts interviewed – I myself was surprised to see several names of authors I’ve read, and even a few folks I speak with from time to time. Christine Lampe – editor of No Quarter Given, Benerson Little – author of the excellent Sea Rover’s Practive, and Robert Ossian of Robert Ossian’s Pirate Cove, to name a few. But the one feature that truly caught my eye about this special was the computer effects. Not the aforementioned superimposed splinters – I’m talking about animated artwork (literally.) True Caribbean Pirates features a number of paintings and woodcuts of pirates – many of which will be familiar to longtimes students of piracy. But they’ve added a very magical touch by subtly animating them, giving the figures dimension and the ocean movement. It’s truly glorious to see, and reason enough to watch this special all by itself. 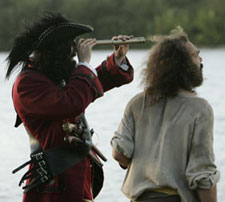 True Caribbean Pirates is mostly appropriate for the entire family. Visual gore is kept to a minimum, although we do see Blackbeard’s decapitated head hanging from the bowsprit of Maynard’s ship. Many brutal acts are described, and some performed onscreen, albeit from angles that prevent any direct viewing of the gore.

True Caribbean Pirates is heartily recommended to anyone caught up in the current Pirates of the Caribbean: Dead Man’s Chest excitement who might be looking to expand their piratey knowledge. Plant the seeds with Disney, nurture the interest a bit with the History Channel… and next thing you know, you’ll have a household full of budding pirate experts!