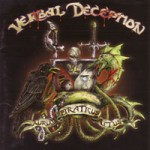 Making instrumental music sound piratey is commonly done with squeeze boxes and banjos, as is demonstrated by a whole range of traditional sea-shanty artists. It is also commonly done with orchestras, as can be seen in an assortment of swashbuckling movie soundtracks. But to make music piratey utilizing rock band-era electric guitars and drums, and to do so before a single “I’m a pirate” type lyric is even uttered, is another trick entirely. Few bands try, let alone succeed.

In their first full-lenght CD, Aurum Piraticus Aetus (Gold makes Pirates Happy, according to my sub-par latin skills), the pirate band Verbal Deception brings on a full broadside of aggressive metal music ripe with lyrics of villainy at sea, and with instrumentals seething of fantasy and distant lands. And on occasion, they even strike those brilliant but illusive pirate instrumentals. And when keyboards and electric guitars manage to sound piratey, it’s a beautiful thing indeed!

The album opens with surf and seagulls, quickly overpowered by gently creepy keyboards and drums. The pace picks up as guitars and vocals – with occasional insertions of more seagulls, and cannonfire – come in to sing of bloodlust and piracy. The vocals are the deep growls – more spoken than sung – that one often associates with metal music, and something I freely admit being largely unaccustomeed to. If you are also amongst the unintiated when it comes to headbanging, then be warned that there is a learning curve. But I found this curve to be surprisingly brief, and I was developing an appreciation for the angry pirate lyrics much sooner than I would have expected. This first song, “Pirate Attack,” contains elements of dockside tavern music hidden beneath the more modern metal elements, albeit translated through electric instruments. Very fun, and surprisingly piratey.

The next three tracks, “Jewels of the Dead,” “Halls of Illusion,” and “Northern Shores,” continue a tale of piracy, dementia, and war – a tale that’s supplemented by journal entries in the CD liner. The lyrics contain many pirate elements, although the music itself lends more towards fantasy. Frequent use of metal guitar and keyboards makes for an ongoing “rock epic” soundtrack of a story that doesn’t fully exist (perhaps that’s the job of the listener.)

“Pieces of Eight” is the album’s lone instrumental piece. Highly energized, it suppliments its metal foundations with fantasy and just a hint of piracy.

“The Scarab” is my least favorite on the album, mainly in that the lyrics leave me scratching my head. Something about a beetle. But then, the lyrics also claim the singer is drinking rum, so maybe I understand after all. The music is one of the more straight-metal sounding on the album, without much fantasy or piracy in the mix. Lots of guitars.

“High Seas” returns us to more familiar content. A brief taste of traditional-sounding (as opposed to electric) guitars provides a nice change of pace before the lyrics chime in with imagery of galleons, beaches, and death. The music speaks of danger and adventure. “The Watcher” then takes over and speaks of a great beast beneath the waves. Again an adventurous song, although the subject matter might have called for something a little slower and more powerful. Still, the second half of the song chimes in with some fun instrumentals.

“The Temptress,” clocking in at a full eight and a half minutes, is a tale of feminine guile. The music focuses extra heavily on speedy guitar work, although it’s nicely accompanied by middle-eastern inspired keyboards.

“Voyage” brings us the most piratey song yet, overflowing with “yo ho hos” and “yarrrs.” The instrumentals aren’t overtly piratey, but combined with the lyrics they become terribly catchy. A very fun song for those who want to endulge in that “bursting with piracy” feeling.

“Under the Black Flag” opens with a delightful return to the pirate-tavern tunes we heard at the album opening – not the same tunes, but a new piratey batch. This nine-minute epic then continues on with more aggressive guitars and fantasy-inspired keyboards. It is also nicely complimented by a few chords of traditional piano, cannonfire, and wonderfully piratey lyrics. The album then concludes with thunder and raindrops.

Aurum Piraticus Aetus is a terribly exciting listen. Fans of piracy and metal music would do well to buy it without hesitation. Fans of pirate music, however, should consider more carfully. If you’re all about the sea shanties, this album isn’t for you. But if you’re like me, and are excited to explore pirate music of all genres, then Verbal Deception can make for a rewarding change of pace. I’ve never been a fan of metal, but I find myself listening to this album more and more. And while the lyrics still take some getting used to, they work well with emotionally-charged, epic instrumentals overflowing with adventure and mystery.