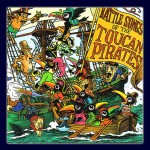 A lively CD full of peppy music for dancing a jig. Steel drums, pennywhistles, and banjos all make for old-fashioned Irish music with a hint of the tropics. But it doesn’t really conjure up images of sea battles and storms – this is more like the music you’d hear in the pub after pulling into port. Apparently the Toucan Pirates realized it needed a little something more, which would be why the music is accompanied by cannon blasts, creaking ships, and the occasional yells of “hoist the mainsails” and such. For me these additions were a little much, but easily forgiven.

Less easily forgiven is that this CD is pretty repetative. Any one song is catchy enough, but after a bit they all start to sound the same – I can only listen to a few before I want to put something else on. They’re all decent, but they’re all rather alike.

Strangely enough Battle Songs’ two weaknesses – the repetative nature and the cheesy pirate sounds – actually manage to work together to salvage the CD as a whole. It’s not much good to sit and listen to straight through, but it should make fine background music at your next pirate party. It’s lively yet unobtrusive, and exclamations like “Yarrr!” and “Set sail for Hispaniola!” will help keep your guests in the pirate spirit.