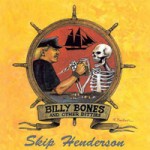 Skip Henderson’s “Billy Bones and Other Ditties” is one of the most aptly named albums of all time. Amongst the track listing is, as expected, the song “Billy Bones” – one of the greatest pirate songs I’ve ever heard. And the rest of the album is a bunch of ditties – some more entertaining than others, but few that really leave a mark.

The album begins with the instramental “The Quilty Hornpipe.” Jiggy yet subdued, it makes for a nice introductory track.

Next up is aforementioned “Billy Bones,” an absolutely brilliant piece that sounds both sinister and self-satisfied as an old pirate calously sings over the skeleton of an old adversary/partner. It has an old-timey sea shantey feel, but carries a drama and a catchiness rarely seen in such songs. Sounding as though it’s performed by genuine pirates, this track alone is very nearly worth the cost of the CD.

“General Taylor” sounds like a drinking song about a funeral. Carries a nice lively beat, but is otherwise unremarkable.

“Tarbaulin Jacket” follows. Also about funeral arrangements, one starts to notice a pattern in the subject matter. Also noticeable is that most of the songs from here an are, indeed, ditties – nice, fun, even catchy at times, but mostly forgetable.

“Two Hornpipes” is another instrumental piece that would be nothing more than jiggy pub music, except this time there’s a twist. While the band plays the sounds of a bar room brawl grow increasingly noticeable, to the point that by the end of the song it’s a wonder the acordian player doesn’t get brained by a barstool. I can’t help but smile when I hear this one.

The next two songs are “The Mermaid” and “Bold Jack,” both of which are decent ditties, but unremarkable.

“Fifteen Men (Bottle o’Rum)” is likely a familiar song to most. Considering its brutally pirate roots, as well as the morbid gidiness with which Skip Henderson sang “Billy Bones,” I had high hopes for this song. Unfortunately, whatever brilliance he injected into “Billy Bones” isn’t apparent in this song. Skip clearly tried for that same genuinely-performed-by-pirates sound, but it comes across as a bit more tame and folky.

“Kerry Recuit” is an amusing ditty about a young soldier being given his GI materials and then sent off to war.

The next batch of songs – “We’re All Bound to Go”, “Two Waltzes”, “Sailor’s Consolation”, and “Porter”, are all nice little ditties, but once again unremarkable.

“Chivalrous Shark” is a nice change of pace. A bit naughty and very amusing, this song tells of a “maneating” shark that has no interest in the ladies. Cleverly done, and definitely funny.

“Oliver Martin (Whiskey Harbor)” is yet another little ditty.

Last on the agenda is “Song of a Ship,” which is a genuinely touching tribute ot the beauty and magic of ships.

It seems this album is about 80% “nice little ditties,” which might make for decent background music, but don’t really stand on their own (unless you’re really into ditties – I freely admit that I am not.) A few songs (“Two Hornpipes”, “Fifteen Men”, and “Chivalrous Shark”) are more worthy of note, but make up a minority of the total songs.

What really gets my goat about this album is “Billy Bones” – it’s so well done, so traditional yet piratey – it makes me want to cry that there aren’t more songs like this. With it Skip Henderson gives us a peek at how truly brilliant folksy pirate music can be, which makes the rest of the album seem that much more lackluster in comparison.