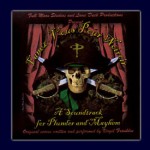 Fanez-Vous Pour Noircir (Fade to Black) is billed as 40 minutes of “soundtrack for plunder and mayhem.” But while the content is certainly ripe with piracy and nautical undertones, these synthisized songs are perhaps a little too crisp and polished to conjure the sort of gritty chaos you might associate with historical piracy. Rather, this is music for journeys of fantasy and exploration, noble exploits and sinister dealings. It goes well with rum, too.

Being as this album is 100% instrumental, it’s difficult to tell you what each song is about. And being as it’s synthisized, it’s sometimes difficult to convey the intruments and styles – drums, pianos, and wind-instrument sounds are present, but so are less easily defined elements. But I can try to convey the tone and feeling of each song, and perhaps a taste of the imagery it conveys (to my own mind, anyways.)

Fade to Black – The album’s titular track. The pace is slow, and the atmosphere mysterious and cavernous – or perhaps it’s the open sea. Whatever the case, one senses danger ahead, although it’s not here just yet.

Dance ‘neath the Moon – Faster. Almost a march, but more swaggerly (imagine an army of Jack Sparrows.) This isn’t a march to victory, but is merely a journey with an unclear destination. The music conveys neither strength nor agression, just simple persistance and hope.

Drunken Sailor – A tune we can all recognize. Fun and catchy, and perhaps a bit more whimsical than usual. Very nicely done.

Spinnaker – This song comes on stronger than any of the previous, conveying a sense of strength and adventure, although with a careful, measured approach.

Death be His Lover – Strong tuba-like instrumentals introduce this track, but not in the dancehall or jazz vein. Picture slow and lumbering. And then additional instrumentals reminiscent of cellos add just a touch of spice and suspense.

On the Wind – Horns introduce a sense of understated heroism.

Hot Blood and Cold Steel – More difficult to define than the other tracks – benevolent, but not heroic. Many of the songs on this album seem well suited to accompany the start or conclusion of a great journey, and this track is no exception. However, it lacks distinct character, making it something of the “are we there yet” of the album.

All for Me Grog – This seems the perfect background music for gaining that first sight of land prior to a long overdue homecoming. Lots of lovely piano work here. It seems oddly named, though. While I suppose you COULD sing “All For Me Grog” to this tune, it would take some effort as it’s generally a rousing pub song, and this track is quite slow and melodious.

Siren’s Song – Another arrival song, but on a much less promising note. One gets the impression that things seem strangely empty and wrong – caution must be exercised. This track is deeply mysterious and features tender reverberations and delicate transitions. Ambient, and ambient again.

Fanez-Vous Pour Noircir is an excellent album for its genre, but its genre is also its primary limitation. Music of this sort sometimes has difficulty finding a home. Essentially a soundtrack without a movie, it’s not really to be “listened to,” and is certainly not for dancing. Too slow for party background music, and yet these tunes are remarkably suited to conjure all sorts of imagery in one’s mind. Perhaps, unlike most any other pirate music, this is an album best listened to alone. Pour some rum, sit back in a comfy chair, and see where the music and your mind take you for the evening. Pirate fantasy emmersion music.