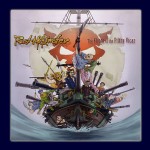 Genre: Pirate Jazz, funk, disco, etc.
Rating: PG
Target Audience: Anyone with a sense of humor and a taste for the odd

With their second album, The Flight of the Filthy Vicar, Rustmonster continues its unique mix of jazz, funk, and experimental to explore pirate matters in a manner which no healthy mind could ever conceive. No fewer than 20 artists lend their creative talents to impress, entertain, and at times befuddle. There is, after all, nothing in this world quite like manly ‘heave ho’s shouted in time with a saxophone, and it’s thus this album begins with its first track, Blood and Bone. It’s a formula that led to astoundingly fun results with their first album, The Last Voyage of the Black Betty, and it works equally well this second time around.

Of course, you can’t cross into the realms of pirate dementia and not turn up a stinker or two; but you can atone for it – and sometimes you can do both within a single track. This is what Rustmoster does with Andrew Lane, a nerve-wrenching song performed in an obnoxious manner with peculiar, pompous vocals. But then the singer is shot dead a third of the way in, and the remainder of the track is indeed his less-than-flattering eulogy. You can’t argue with results.

Digging deeper into the album we find the circus vaudeville-esque style of Brutal Pirate. It’s a fun, catchy song in which the singer tells how he used to be a good boy, but has since become a pirate. It has a vaguely epic quality about it, which makes for a fine quirkiness. The Storm, in contrast, is reminiscent of The Stray Cats, with a back alley jazzy rock quality. It’s a surprisingly peppy tale of regret as a pirate realizes his fate isn’t what he’d hoped when first signing articles.

Lost Not Found begins with a comedian on a cruise ship full of pirates (titled the S.S. Bilgemunky* by strange coincidence). The song then takes off and reveals itself to be an energetic song of soulful piracy performed an a manner reminiscent of 70’s disco. “Doo-waas” and retro-laser “pew pews” abound as the singer shares his piratey life story. Bully in the Alley, however, is perhaps the closest Rustmonster ever comes to traditional shanties. It’s a historical song performed in a primitive – and very drunken – manner. Actually, the primitive nature is an illusion as the drums, cranking noises, and other sounds become quite complex as they intertwine. Bully in the Alley as you’ve never heard it before, and it is grand.

The album ends with Poop Deck, a terribly (and intentionally) goofy song that I’d liken to doing shots of Jaegermeister – it’s not necessarily pleasant going down and it leaves you feeling strange afterwards, but you’ll keep doing it until you pass out. I have a feeling this track was the product of a dare. Something like a children’s sing along, something like watching cartoons drunk, it’s just all out difficult to describe.

As before, Rustmonster remains a band with little to offer the traditional shanty ear – but all others should pay attention to this lot. Strange, diverse, fun, humorous, and PIRATEY, The Flight of the Filthy Vicar is a piece of swashbuckling oddity that you should really check out.
*Note – artists take note, using Bilgemunky’s name in your music (in a complimentary fashion, of course) guarantees a full star extra when your album is judged!)**

**No, not really! Rustmonster’s star rating is a full and accurate reflection of my opinion of this album, the use of my name regardless. Even though them using my name is entirely awesome!!!

2 thoughts on “Review: Flight of the Filthy Vicar”