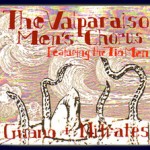 A few times each year, it seems, an album comes out of left field and absolutely blindsides me. Generally it’s from an outsider band (read that, not established as a pirate band), and usually they do something so novel that it makes for an absolutely unique, must-have album. The Valparaiso Men’s Chorus album Guano & Nitrates only came into my possession through the most unlikely of circumstances – I likely never would have found them on my own. And such would be the tragedy.

If one’s to believe the liner notes (and why wouldn’t you?), Guano & Nitrates spawned from little more than someone having recording equipment and beer lying around on the Monday after Thanksgiving. When the beer was gone and the tape had run out, Guano & Nitrates was the fruit that had sprung forth.

This album is entirely composed of traditional sea shanties. The likes of “Drunken Sailor”, “Blow the Man Down”, “Spanish Ladies” and such. Generally, a strictly traditional selection does not a remarkable album make, but the Valparaiso Men’s Chorus enacts several strokes of genius. The first, and most immediately noteable, is a definitive New Orleans party flair to their music. Acccordians and pennywhistles are utilized alongside trombones and sousaphones to make for a highly energized pace that at once is contageous and makes me crave gumbo. This element alone makes the album loads of fun, but the Chorus goes a step further by injecting yet another aspect that is often lacking from sea shanties – they swear like sailors, and they do so with a casual grace that leads the listener to believe they’ve been cussing their entire lives. The vocals are raw, real, and brilliant. What they lack in polish they make up for in piss and vinegar. Indeed, polish of any kind would only hinder the brilliance, and I’m very grateful they managed to sound as rough as they do.

Much of Guano & Nitrates is fast paced and high energy, but there are exceptions. “So Early in the Morning” sounds like a hangover song (the sort of hangover where you immediately reach for the hair of the dog that bit ya). “Spanish Ladies” and “Rio Grande” are as close to ballads as the album has, yet remain as wonderfully edgy as any other song therein, while achieving some level of gentleness for a change of pace. And “Rosyanna” has a few wonderful nods to modern New Orleans, making reference to modern bars and goth girls alike.

Very few albums capture a proper drunken sailor attitude so effectively as does Guano & Nitrates. It walks that delicate line between musical and rough with near perfection, being both a joy to listen to alone, yet a blast to sing along to while completely sloshed out of your skull. I absolutely adore it.