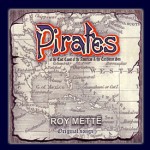 Yes, it does occasionally happen that I fully, shamelessly gush my love of a pirate album. So if that doesn’t suit you, then just save yourself the trouble and skip past this review – you don’t need to read it, but you *do* need to buy Roy Metté’s Pirates of the East Coast of the Americas & the Caribbean Sea.

Boasting the wordiest, most awkward title I’ve seen on a pirate album in some time, with Pirates of the East Coast of the Americas & the Caribbean Sea, Roy Metté nonetheless achieves a marvelous perfection in his craft. Being contemporary folk with nothing remotely “folky” about it, Pirates features 14 original songs – most of them inspired by historical pirates – that are each and every one astounding achievements in themselves. The introductory track, Bartholomew Roberts, is a surprisingly perky tale of one of history’s most successful pirates. The guitar work is pleasant yet retrospective, as are the lyrics. Roy’s vocals seem to channel shanty legend Tom Lewis at times, albeit focusing on far more piratey subjects. Throughout the album his subjects and styles range from the pleasant to the ironic to the very, very somber.

Subsequent songs vary widely in pace and style, although quality is consistently high. Calico Jack is something of a left-handed toast, offering the belated pirate a brief raise of the glass, but nothing more. It comes across as tributary yet dismissive, which for those that know the exploits (and end) of Calico Jack may seem perfectly apt treatment. Captain William Kidd, however, is all respect in the most low key, solemn means possible. The tale of Kidd is told through the reflection of his hanging corpse – a concept that could seem unduly morbid, but it’s so eloquently handled that it achieves a level of artistry seldom seen in pirate music. Each song of this album, in fact, is uniquely suited to the characters of the pirates they explore, including Anne Bonny, Black Beard, Jean Lafitte, Charles Vane, and Benito De Soto.

While the vast majority of songs on this album are dedicated to individual pirates, there are a few exceptions. Paradise Island is a song of resignation as an unnamed sailor comes to grips with being marooned and watching his crew sail off without him. Tortuga is a tribute to the famous pirate stronghold, while Sailing Free arguably approaches a true sea shanty with it’s repeated lyrics and near worksong beat. The Articles of Black Bart also stands apart nicely in that it consists of the direct reading of genuine pirate articles against a layered backdrop of guitars. The album concudes with Polly the Parrot of the Caribbean, which makes wonderful wordplay of directions and numbers, utilizing shifts and repetitions to a point that it’s nearly hypnotic. This final song does feature a parrot that sounds a tad silly, but the nature of the song makes the interjection of a bird both fitting and necessary.

It’s called Pirates of the East Coast of the Americas & the Caribbean Sea. It’s by Roy Metté, and you really, really need to own this album.