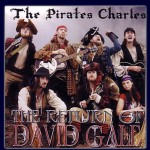 It wasn’t that long ago that no one had heard of The Pirates Charles – primarily in that they didn’t yet exist. And yet in only a couple short years, they quickly rose from obscurity into what is arguably one of the best known, best loved, and “truest” pirate bands around. The secret is a rare blend of the traditional and new – sea shanties mixed in with just enough rock&roll to, well, rock, but not so much as to wholly modernize their music. Of course, the icing on the cake is that The Pirates Charles both look and sound the parts of true scallywags – an important factor in the evolution from sea songs to pirate songs.

The Return of David Gale is The Pirates Charles’ third album – second if you don’t count New Steez, which is no longer in print. And like its predecessor, Live Scallywags, it’s a wonderfully irreverent mix of the harmonius and gutteral, the unpolished, unwashed, and yet still strangely presentable. And like all the works of The Pirates Charles, it strikes at the very heart of Pirate-Core.

The album begins with its title track, Return of David Gale. Something of a two part song, it starts with a slow drumbeat and deep vocals of a tribal-esque campfire quality. This soon breaks out into rolling guitars that would almost seem light and jazzy if it weren’t for lead singer Spoo’s brilliantly rough vocals. (It now occurs to me that Mr. Spoo Diggity might actually be the only figure in the pirate community with a name as silly as my own. But I digress.)

The album continues in TPC’s usual style with a few traditional songs re-envisioned in their own image, and a whole stack of original pieces. Highlights include several of their all time greatest songs, such as No One Knows, which proudly displays the band’s remarkable ability to be haunting yet raw all at once as they sing a delightful tune of death at sea – narrated by one of the very victims so recently claimed by a watery grave. Why Am I So Thirsty? tells of a lush who wakes up in bizarre and unflattering circumstances with no recollection of the previous night – and with only one question on his mind, “If I had so much to drink at night, then why am I so thirsty?”

Go F**k the Queen will be a much loved song by anyone that rolls their eyes at the courtly customs found at Ren Faire. God Save the Queen? Hardly. This song is rollicking and shameless. Whiskey In the Jar goes on to feature one of the album’s more jig-worthy songs (most are more suited to a pirate mosh-pit full of aimless jumping and bouncing). Less sinister than the well-known Metallica cover, it’s also significantly saltier (but we’d expect no less.)

Rise of the Buccaneers is clearly a definitive TPC song – brazen, aggressive, and perfect for stomping to the beat while Spaniards cower in the deck below. With lyrics full of cutlasses, wounds, and all sorts of other pirate staple items, it just might be one of the grandest pirate songs out there.

The Return of David Gale features 17 tracks. Some stand out more than others, but there’s not a dud amongst them. By my rough estimate, I’d say 12 of these are originals, with the other five being traditional. Oh, and then there’s the 18th track, found tucked into the tail end of the 17th if you listen to the silence long enough. This bonus song is the most heart-wrenching, dramatic rendition of Farewell to Nova Scotia I’ve ever heard, and almost makes the album worth buying all by itself.

This is a definite must-have album. Fans of modern pirate music will love the rock attitude that steeps through the music and lyrics throughout, while even hardcore fans of traditional sea music will enjoy the new takes on their traditional favorites (and I’m not just saying that – I’ve spoken with several traditionalists who don’t give a rat’s ass about Pirate-Core, and yet they know – and love – The Pirates Charles.)

3 thoughts on “Review: The Return of David Gale”