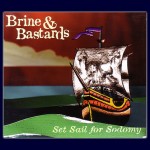 It’s rare to come across an album that is true, undiluted PirateCore from beginning to end, but Set Sail For Sodomy is one such gem. The debut album of Brine&Bastards, it features that perfect mix of rock and punk with sea songs and tales of debauchery.

The album begins strong with Divide the Plunder, a quirky piece in which a squeezebox captures the roll of the sea as an increasing amount of background noises (oceans, birds, barnyard animals) chime in. Loud foot stompings then transition us sharply into A Pirate’s Life For Me – a song that shares names with the famous Disney song, but shares little else. Rather, this is an original piece featuring guitars and aggressive lyrics of seagoing villainy – Pirate rock at its blatant finest.

Subsequent songs follow in this same vein. The Pilot, Battle Stations, Last Call, Song of the Siren, and Beneath the Waves are all highly enjoyable, highly energized original pirate rock songs. Brine&Bastards polish their music enough to be easy on the ears, but leave it rough enough to remain starkly piratey. Spanish Prison is an equally fun track, but it bears special mention due to it’s brilliant usage of kazoos, and humorous lyrics (“Shackled my legs and they shackled my arms. Then they took my ass and they through it overboard.”) – certainly an anthem for anyone that’s ever been laid off.

Whiskey Johnny and The Leaving of Liverpool also merit special consideration, as they’re both traditional songs – albeit performed in a non-traditional way. Brine&Bastards lend their rough rock/punk pirate style to these familiar songs, thus reinventing them into something altogether new.

The album concludes with Beer and Loathing and Prayer (For a Homesick Sailor) – again, both original songs. But this time they carry some additional emotional undertones that stand apart from the rest of the album. They’re still very much from the rock/punk world, but they have a softness beneath the lyrics that’s well suited for concluding an album such as this.

Despite it’s title, Set Sail for Sodomy features relatively tame lyrics. The only “dirty” elements I noticed occured during a spoken word piece in the middle of Overboard in which the band introduces itself. This spoken piece is fun the first time, but I found it distracted from the remainder of the song during subsequent listens. However, this brief moment is really the only shortcoming I found on this album, which is otherwise a shining credit to the growing world of PirateCore.