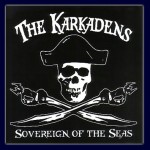 One of my favorite things about Pirate-Core music is when a band takes pirate themes and lyrics and injects them into a musical genre that on its face would seem entirely not-piratey. Sometimes this results in humorous contrasts. Other times, as with the album Sovereign of the Seas, it’s done so flawlessly as to make the combination seem as natural as parrot poop on a captain’s shoulder.

Rockabilly isn’t a style of music that I’d normally equate with pirates. But in the hands of the The Karkadens it seems the perfect vessel – deep bass guitars combined with trombones, drums, and trumpet are utilized to create music that’s heavy, fast, and atmospheric. And the vocals – throaty and aggressive, capture elements of battle, defeat, desperation and victory.

With their hooligan-ska style, The Karkaden’s lyrics are often difficult to follow from beginning to end – this isn’t “listen to the story” music, but rather “stomp along and pick up what you can” music, ripe with pirate references of death at sea, yo-hos, and black sails. Don’t expect to even get “the gist” of a song without close, careful listening – but that’s not the point. Some pirate music is for singing along with, rum in hand. Other pirate music is for commemorating the exploits of pirates – real and imagined. But Sovereign of the Seas is full of music suitable for only one thing – kicking ass at sea, and then moshing in triumph.

If your idea of pirate music ends at High Barbary, then this album might make your head explode. But if you enjoy pirate rock, Flogging Molly, or even an unusually aggressive jig now and then, then Sovereign of the Sea should be a real treat.